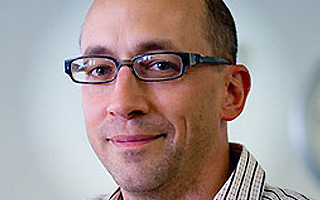 In a press conference at Twitter this morning, CEO Dick Costolo laid out the present growth of the company and what its 100 million users can expect in the near future.

Costolo touched on three main points: the service’s revamped back end, the growth and changing behavior of users, and Twitter’s business plan and revenue streams.

The startup has been through quite the management shuffle over the past year or so. Co-founders Ev Williams and Biz Stone both left the company, and co-founder Jack Dorsey, who had for some time been gone and working on a new venture, Square, returned to Twitter this spring. Throughout the musical chairs game the founders seemed to be playing, Costolo remained a consistent guiding force at the company, first as COO and then as CEO beginning last fall.

At the time, we wondered whether Costolo would be able to turn Twitter into a real business and not just another social media app.

As he stepped into the role, Costolo said he began by “working with the senior team to crystallize what was unique about Twitter, what we were trying to do beyond being a microblogging service. What we arrived at is, we connect people everywhere to what’s meaningful… We want Twitter to be the world in your pocket.”

Last fall, Twitter made an internal decision to not ship any new features until their entire infrastructure was overhauled. Throughout the summer of 2010, the service had seen record numbers of tweets shooting across the service, but the servers and architecture couldn’t keep up the pace.

During the World Cup last summer, Costolo said Twitter saw a record-setting 3,300 tweets per second. However, at the time, “We were throwing fail whales way too often,” Costolo continued. “We were running at 100% CPU across all our machines; we were at capacity.”

So Twitter over the winter focused on porting its existing infrastructure to a new one, including a new data center and new servers that would allow the service to scale. “That’s an expensive challenge,” said Costolo. “Engineers and product people had to wait on everything they were working on.”

Two weekends ago, Twitter hit a new record of 250 million tweets per day and 8,900 tweets per second. “The great thing about that was we didn’t even blink when we had all that traffic,” Costolo said. “We didn’t even know we’d set a record until we came in the next morning. So the infrastructure work was a great success.”

Twitter’s userbase has grown to include 100 million global active users — that is, users who log in at least once a month — and 50 million of those users login every day. Costolo said that 55 percent of Twitter’s active users are active on mobile.

One surprising stat Costolo threw out is that 40 percent of Twitter’s active users don’t tweet. They follow accounts, read timelines, click links, check out profiles and even favorite tweets, but they themselves don’t publish any content.

“A year ago, when you signed up for Twitter, the first thing you’d see was the big ‘what’s happening’ box,” Costolo explained. “People didn’t know what to do next.; they didn’t have any followers, and they weren’t following anyone. Nothing happened. Now, we get new users to think first about following their interests. Get a timeline and start engaging that way.”

Costolo continued to say that the company considers such activity actually healthy, and he talked about creating workflows to migrate those users gently from a passive to an active experience where publishing tweets is part of using Twitter. “Maybe you’ll see something you like and retweet it, or you’ll reply to someone.”

Changes in product, changes is business

Costolo told us that wee can expect some pretty fundamental changes in Twitter’s design in the near future.

“We want to simplify the interface,” he said. ‘We want it to be dead simple and consistent between devices and platforms.” In other words, Twitter wants Twitter.com to look and have the same features as Twitter on tablets and Twitter on mobile devices.

“We’re also tightening the feedback loops — making it obvious when a follower does something and letting you react to it,” said Costolo. “The Activity feed [a new feature that surfaces non-tweet activity from people you follow] was part of that.”

Costolo said that in addition to showing non-tweet activity, they want to start showing more activity from people you don’t follow yet. For example, the company is going to be bringing ads from brands you don’t follow into your Twitter experience. Also, Costolo said, “We want to let you know when a mobile contact in your phone signs up for Twitter.” So you’ll be able to get notifications about new users you might know personally and want to follow.

He related a story about how poorly organized information on Twitter led to some confusion for mainstream audiences. Earlier in the year, people were hearing that Middle Eastern revolutions were happening due to Twitter and wanted more information than what they were getting in the news. “But you had to know to go to Twitter and type in #Jan25. We want to make that a lot easier,” he concluded.

Overall, Costolo says, “The health of the business is great.”

Twitter’s revenue, long the bane of press conferences and company conversations, is now robust enough that Costolo sees no need to go beyond advertising (and some revenue from access fees for its firehose API) to make money.

“I get a million emails a day about what Twitter could be doing to make more money,” the CEO said. “But I don’t think there’s anything else we need to do to make more money; the advertising business will sustain us.”

If Twitter holds to its word in this area, companies like Hootsuite, CoTweet and TweetDeck can breathe a sigh of relief and hold onto their enterprise customers, who pay for the privilege of getting detailed analyses of Twitter’s performance as an advertising and CRM platform.

“We have no intention to scale the data licensing business,” Costolo noted. “It’s important to us that third parties have access to the data. We’re just going to focus on scaling the advertising business.”

And the ad business is good. Costolo said, “The message we hear from brands and small businesses is they’re paying attention to Twitter as a marketing platform due to the level of engagement. And publishers are seeing that we’re driving a huge volume of traffic.”

The company will start working on creating more targeted ad campaigns — likely something akin to what Facebook does, aiming ads at consumers who, because of location or expressed interests, are more likely to respond to a given call to action.