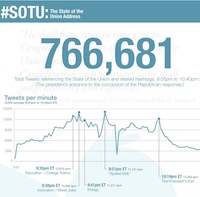 When it comes to significant events that are shared across the country (and sometimes the world), Twitter is getting increasingly good at making sense of the real-time data collected from tweets. Take for example last night’s State of the Union address, which racked up 766,681 tweets during the full 95-minute event.

Twitter has previously reported moments of unusually high activity, such as pop singer Beyonce’s pregnancy announcement during MTV Video Music Awards, a tense U.S. women’s soccer team game, and Japan’s New Year’s Eve 2010 celebration. The most frequently cited metric Twitter uses during these events is “tweet’s per second” (TPS), which is determined by measuring the number of times the world mentions a specific subjected over the course of a single second in time. Although during President Barack Obama’s address, the company thought it more relevant to use a Tweets per minute (TPM) metric.

While the data is definitely interesting, I’m more impressed with Twitter’s quick turn around as well as the relevant metrics identified. The company is definitely planning to use its real-time data to show genuine behavior, and the demonstrations presented from the State of the Union address are likely barely scratching the surface.

Following the data results, Vice President Joe Biden announced that he would participate in his first Twitter discussion tomorrow (Jan. 26.), undoubtedly with the aid of a tech-savvy intern or administrative aid.

For a more detailed look at the data, check out the infographic from Twitter embedded below. (Click image to enlarge.)