This question has been bounced around by many people, including the company’s investors, who have been watching Twitter’s stock price slowly decrease (with this exception). At one point, the social messaging platform was described as a “global town square,” but that vision has shifted. Newly installed chief executive Jack Dorsey said you should expect Twitter to “show you what’s most meaningful in the world — to live it first before anyone else and straight from the source.”

That starts today with the debut of Moments, the public incarnation of what was originally classified as Project Lightning. Available on iOS, Android, and desktop Web, this feature focuses on surfacing great tweets and information about a particular event. The Moments are curated by Twitter’s internal media team and include contributions from a select group of partners, including BuzzFeed, Entertainment Weekly, Getty Images, NASA, The New York Times, Vogue, Major League Baseball (MLB), and others. 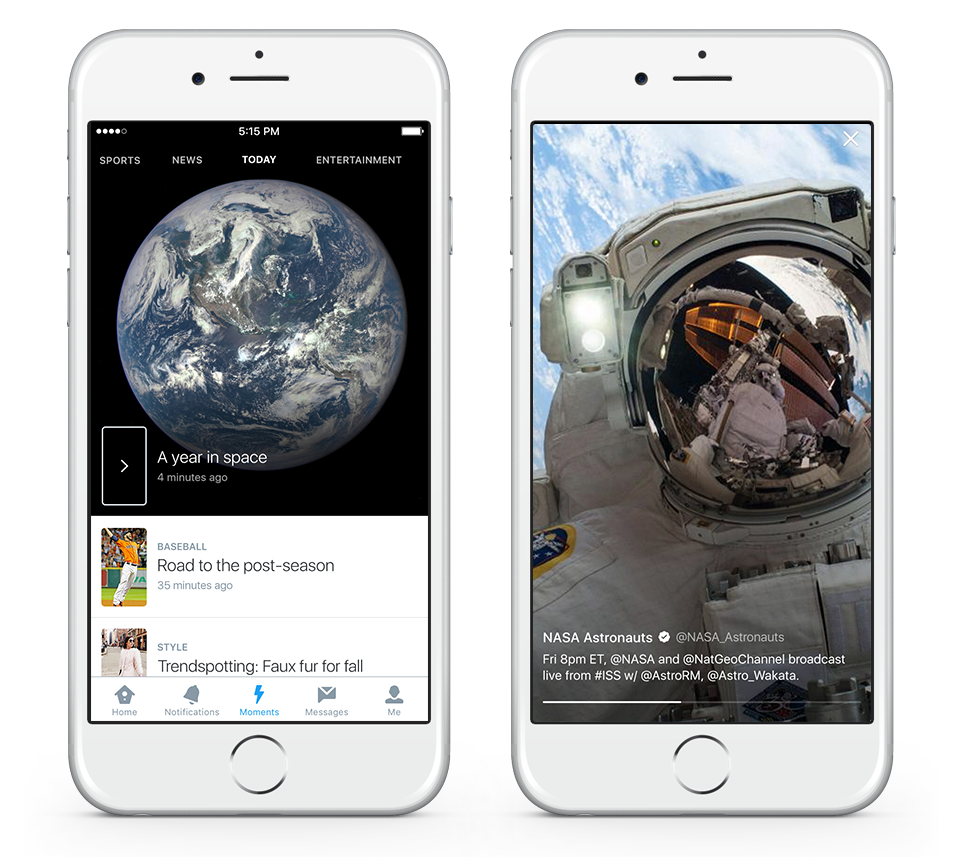 Twitter is adding a new Moments tab to its apps that, when tapped, will display the stories along with the much larger conversations taking place on its service. The section will be updated throughout the day, and users can cycle through various categories of stories by topic.

Reportedly called a “bold change, not evolutionary” by Twitter’s senior vice president of product, Kevin Weil, each Moment appears almost like a conversational magazine. It starts off with a title and description of that story. Then, by swiping on the screen, you’ll see immersive full-bleed images, autoplaying videos, Vines, and GIFs — all the media to really paint a picture about what’s going on. Tapping on the media will display the full tweet, which you can then favorite, retweet, or share in some other way. You can also double-tap to quickly favorite it.

Moments will display tweets from any of the service’s 316 million monthly active users, regardless of whether you follow any of them or not. It’s likely that in order to present a well-represented view of each event, Twitter will pull tweets from a variety of sources, verified and not, based on the engagement level of the tweets.

Twitter has been working on this for months, as it seeks to boost its user numbers in order to appease Wall Street. The company’s second quarter performance disappointed many, including then-interim CEO Dorsey. Now it’s time to see if Twitter’s latest gamble pays off: Will users resonate with this notion that the service is all about events? It’s quite possible, if you believe this study from the American Press Institute (API).

Surveying more than 4,700 social media users, the API found that Twitter users tended to be heavier news consumers than other social media users: “News…is one of the primary activities that they engage in on the network.”

“While Twitter users follow news in general on the service, and sometimes do so just as a way of passing time, they act differently when they are following breaking news, becoming even more participatory—commenting, posting and sharing at moments when events are moving fastest.”

What’s particularly good for Moments is this finding: 94 percent of Twitter news users get their fix by scrolling their timelines or browsing tweets of those that they follow. The results also showed that 34 percent of users say they get their news from trending topics, and 30 percent use Search. If true, this indicates that the majority of people who are looking for news about the Emmy’s, the Olympics, the Presidential debates, or the horrific school shooting in Oregon don’t want to search on Twitter — the feed just has to be there. This is where Moments could shine.

The debut of this service comes about 24 hours after Dorsey was named Twitter’s permanent CEO. With the Dorsey era officially underway, we might expect more features and changes to the service, including longer Tweets (Twitter already got rid of the 140-character limit for direct messages).

Although Moments is initially only available to those in the U.S., Twitter says that any Moment can be shared across the Internet. Just send a link to a Moment in a tweet or direct message, or embed it somewhere, and anyone can access it to see what the hype is all about. Twitter says it’ll expand this feature to more markets “in the coming weeks and months.”