Twitter has traditionally had more lax signup requirements then its oft-cited competitor Facebook. Users haven’t had to give their full name on Twitter, for example, which has made it easier for users to protect their identity but has also made it easy for spam accounts to take over the platform.

Now the company is outlining a series of steps to fight spam and what it calls “malicious accounts,” while also trying to keep the platform healthy and safe for all users.

In a blog post, Twitter’s Yoel Roth and Del Harvey said that new users will now have to confirm either an email address or phone number when they sign up for the platform. This change will be rolled out later this year, and the company says that its two-year-old Trust and Safety Council will also be working with NGOs to “ensure this change does not hurt someone in a high-risk environment where anonymity is important.” The company will also start “auditing existing accounts for signs of automated signup.”

Roth and Harvey also detailed the effectiveness of new systems the company has created to more proactively identify spam accounts. First, they revealed that the number of accounts identified and “challenged” by Twitter as being potentially spammy or automated is now up to 9.9 million per week, from 2.5 million in September 2017. The company attributes the uptick in the number of spam accounts identified to new developments in its machine learning tools, but didn’t share specifics. 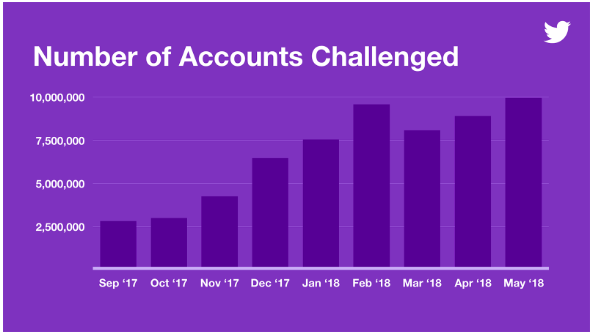 Twitter also said that the average number of spam reports submitted by users has dropped from about 25,000 per day in March to about 17,000 per day in May. The company says that this decrease means people are “encountering less spam in their timeline, search, and across the Twitter product.”

As Bloomberg noted, Twitter has previously been criticized for failing to quickly remove a number of fake Russia-linked accounts the company discovered in early 2015, as campaigning for the 2016 U.S. presidential election began to ramp up. Thus Twitter will also face a critical test in how well it deals with removing spam accounts throughout the 2018 U.S. midterms and other elections, when bad actors might be more motivated to create a large number of spam accounts.

The other component of Twitter’s goal to “promote a healthy conversation” is to reduce the amount of hateful conversation and bullying that takes place on the platform. To this end, Twitter announced last week that it was acquiring Smyte, a startup that developed an API to catch “spam, safety, and security issues.” Twitter also revealed today that it’s expanding its automated processes to catch malicious behavior by tracking things like an unusually high number of tweets from the same account.