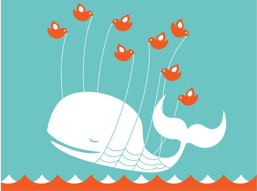 Anyone who read the comment’s on yesterday’s post, Twitter: Don’t blame Ruby, blame Scoble, will know that blogger Robert Scoble was not too happy that Twitter seemed to be placing some of the blame for its woes on the “popular” users such as himself. (For the record, Twitter never explicitly mentioned Scoble’s name, but it is fairly obvious that Scoble is perhaps the most server-straining of the popular users, see Dave Winer’s Twitter Spewage list for more on that.)

Today, armed with his Nokia N95 mobile video phone and the power of live streaming video service Qik, Scoble invaded the Twitter offices to get answers. The video, embedded below, shows Twitter co-founders Ev Williams and Biz Stone being very open about some of Twitter’s most recent issues. As we’ve said before, this newfound transparency is definitely a good thing.

From the outset of the video it’s very clear that Williams in particular wants Scoble to know that they are not blaming him for the service’s woes — but they do seem to agree with Scoble’s own assessment that he is a burden on the system, joking even at one point that perhaps he could get his own server, where he can’t talk to anyone. Still, they correctly allude to the fact that the problem the Scoble and other power users create is their burden to fix.

For me, this blaming Scoble aspect was just a somewhat facetious approach to come at the real story, which was a discussion about some of the very real problems and misconceptions about what Twitter is facing right now. Anyone who read past the fifth paragraph will find the real meat: the discussion with Nati Shalom, GigaSpaces’ chief technology officer, about what Twitter could have possibly done differently when launching the service (hindsight is, of course, always 20/20) and what can be done now.

It’s clear from Williams and Stone’s responses in the video that a lot of what Shalom was saying was right on the money. There is no simple, quick fix for Twitter, but the team seems confident that it will be able to tackle its issues.

So don’t blame Ruby on Rails, don’t blame Robert Scoble, blame the desire to get a new kind of company off the ground quickly and not knowing if it would even pan out.

It is also interesting to note that at one point in the video Williams says Twitter hasn’t ruled out temporarily suspending new account sign-ups or possibly turning off the ability to add new friends — so sign up and follow us while you can! You can find me on Twitter here along with fellow VentureBeat writers Eric Eldon, Dean Takahashi, Anthony Ha and Chris Morrison. Oh, and we have a VentureBeat account (for our posts) as well.