The third party site traffic analytic tools were unanimous: usage of Twitter went down fairly substantially during the middle of June. That tends to happen when you service simply doesn’t work. This lead many to proclaim that other services such as Plurk, Identi.ca and FriendFeed were on the verge of rising up to take its place.

There was just one problem with that — none of those service had anywhere near the number of users that Twitter had. Now there’s another problem, Twitter usage is on the rise again.

Yes ladies and gentleman, the reports of Twitter’s demise have been greatly exaggerated. By the end of June, when the service was for the most part stable (though lacking some features), the number of users on the site reached new heights. It’s important to note that this is only for users actually visiting Twitter.com, and not for those who use the service via other means such as SMS and instant message (though the latter functionality still does not work).

The social content conversational site FriendFeed continues to grow in usage as well, but as I’ve laid out before, there is plenty of room for both of them on the Internet. In fact, their relationship is still symbiotic for many people.

I’m still of the mindset that the only thing Twitter has to fear is Twitter itself. That is to say that no other service is going to kill it, not even a more open clone like Identi.ca. Only Twitter can kill itself, by not fixing its problems. But it’s working on those, and if the rumors are true and Twitter did buy the search site Summize today, we may see those who left the service coming back shortly. 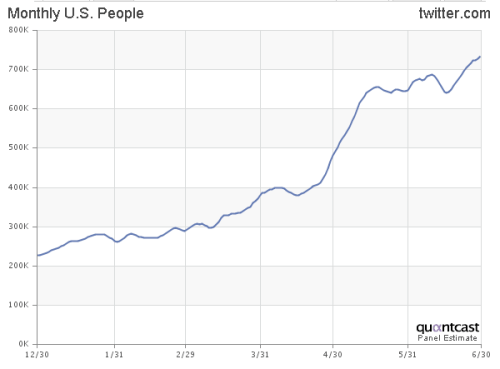