The lack of any search functionality within Twitter has been, quite frankly, ridiculous. The company itself said it would be coming shortly last fall, and yet it never came. Meanwhile others, including FriendFeed added the ability to search tweets (Twitter messages). With its purchase of Summize now complete, Twitter finally has its search and it’s time to move on to the next glaring omission: Mobile.

The mobile version of Twitter found at m.twitter.com, for lack of a better word, sucks. It is fairly fast, I will give it that, but that’s only because it is so barebones that it makes skeletons look meaty. When I try to use it on my phone, I can’t even see the entire message I’m typing because the input box is so small. If you only have a little bit of time to check it out (as I would suspect most do on their phones), catching up on what you missed is nearly impossible because of the lack of the aforementioned search. And even attempting to look back manually through tweets, you can only got back a few pages before Twitter cuts you off completely.

Worst of all, there is no way to see your replies. It’s laughably bad to the point of being useless. 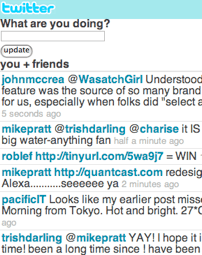 With the new Apple iPhone and iPod Touch App Store, 3rd party native clients are starting to come out, but is Twitter really going to always rely on 3rd parties to do its work for them?

The app that is hot right now is Twitterific. It’s pretty good, but leaves quite a few things to be desired — namely it’s slow and buggy. Loading it up takes several seconds and quite often the application will just close itself. Another one, Twinkle, looks promising (I used it a bit on my old, jailbroken iPhone and it worked quite well), but it’s not approved for the App store yet.

If Twitter doesn’t release its own robust mobile client, it’s really dropping the ball. This isn’t limited to the iPhone of course.

The location-based capabilities of several phones including those built around the upcoming Android platform by Google look to offer a lot of exciting possibilities in the mobile space. Twitter seems like a company perfectly poised to take advantage of this excitement, but so far, has given no indication it plans to do so.

Just imagine how useful a location-aware Twitter app could be (to those who choose to use such functionality). Imagine a Twitter app with Summize search built into it. Twitter could be the de-facto messaging application of this new mobile generation. It could kill the colossal rip-off that is the text message.

I realize that Twitter works with SMS, but with companies like AT&T now charging $5 a month for 200 tiny text messages (the new rate for the iPhone plan), using that for Twitter would be ridiculous.

The one thing that always comes up when people talk about Twitter is business model. Everyone wants to know how Twitter is going to make money. Well one thing is could do right away is build an iPhone app and sell it in Apple’s App Store. It could even do exactly what Twitterific is doing and have an ad-supported free version and a paid version without the ads.

Twitter co-founder Ev Williams seems open to the idea of eventually putting ads in the Twitter stream, as he recently told Mike Arrington of TechCrunch. He actually is open to a lot of things, but seems entirely unsure of which route to take. 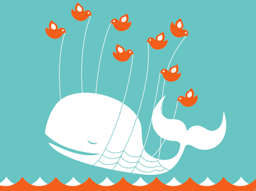 Twitter has done a great job hooking in some of the tech elites in the Bay Area, and now it is expanding in popularity in places like New York City and even other countries like Japan. It’s been doing a great job recently fixing the reliability issues that have plagued the site for months. The Fail Whale (pictured: left) is showing up less and less. Now with Summize on board, I have a feeling we’re going to see a lot less animosity surrounding general discussions about the site, and more talk of great growth. But Twitter must remain ahead of the curve.

I still think it will eventually hit the mainstream, but at least part of that belief is contingent on it embracing the mobile space. Twitter simply needs to do so before someone else beats them to it. Facebook and others are already coming.