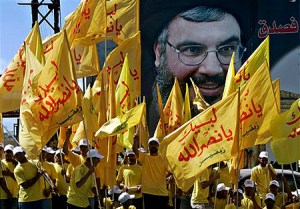 Israeli legal center Shurat HaDin has threatened to sue Twitter for allowing alleged terrorist groups to use the service.

In a letter to Twitter, Shurat HaDin executive director Nitsana Darshan-Leitner called Twitter’s allowing Hezbollah and Al-Shabaab (a group affiliated with Al Quaeda) to use the service “illegal” and threatened both the company and its executives with civil and criminal lawsuits.

Hezbollah is a Shi’a Muslim militant group and political party based in Lebanon. Many Western governments classify Hezbollah as a partly or wholly terrorist organization.

The letter from Shurat HaDin goes on to mention a 2010 Supreme Court decision that states providing material or even intangible support to foreign terrorist organizations is a crime. The law center feels that allowing access to social media tools constitutes support, in this case.

In the past year, the law center has also contemplated going after Facebook because of several Facebook pages created by Palestinian activists that called for a Third Intifada (or rebellion against occupation of Palestine by Israel). While Shurat HaDin noted the similarities between this proposed action and the other rebellions of the Arab Spring, the center also said the pages included “a call to a killing of hundreds of Israelis as happened in the first and second Intifada.”

However, Shurat HaDin never followed through on the threats. In response to a separate lawsuit from another attorney, a Facebook representative stated at the time, “While some kinds of comments and content may be upsetting for someone — criticism of a certain culture, country, religion, lifestyle, or political ideology, for example — that alone is not a reason to remove the discussion.

“We strongly believe that Facebook users have the ability to express their opinions, and we don’t typically take down content, groups or pages that speak out against countries, religions, political entities, or ideas.”

Twitter declined to comment on the threatened legal action. However, the company has a longstanding commitment to free speech, especially in the politically turbulent Middle East. From the Iranian elections and protests in 2009 to the Arab Spring uprisings in 2011, Twitter has been an important tool for shifting regimes and budding democracies. The service is also used by more Western movements such as Occupy Wall Street.

The line between free speech and hate speech is often a fine one; we’ll update you if and when Shurat HaDin determines that Twitter has crossed this line and decides to follow through on its threat.