Twitter is testing a new “You may also like” column on the right-hand side of individual tweet pages on Twitter.com. “I can confirm this is an experiment for a limited group of users,” a Twitter spokesperson told VentureBeat.

The experimental feature shows five apparently related tweets. Note that I do not follow Mark Hazlett nor DigitalOcean, and they do not follow me: 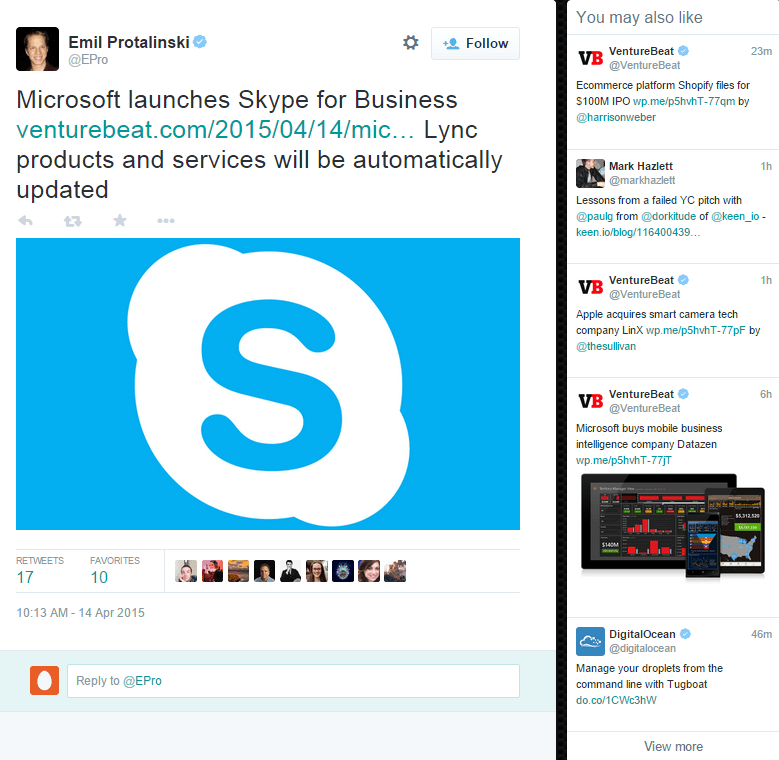 A source close to Twitter said this experiment has been around for a while, and indeed a quick search on the social network itself shows someone first noticed exactly a month ago on March 14. Yet I only spotted it on my account today, suggesting it has since been expanded to more users.

Clicking on the “View more” button at the bottom of the column opens up 10 additional tweets, but the implementation is poor: They simply show up directly below the original five (notice the scroll bar in the screenshot below). The column could easily be made wider to avoid all of this scrolling, though Twitter may be wary of doing this so as not to remove the focus from the main tweet in question.

This is a smart move on Twitter’s part as many new users find their way to the site by stumbling on a specific tweet. There often isn’t anywhere to go from there, aside from the replies listed below.

Interestingly, I don’t see this new column on every single tweet page. It doesn’t appear to be based on the author of the tweet: While testing, I opened a VentureBeat‘s last few tweets, and three-out-of-five showed me the column.

If the column does show up for a tweet, it’s always there if you open it again. That said, if you open the same tweet a few minutes later, the column will show a different set of tweets.

It’s not currently clear if Twitter will decide to roll out this feature to everyone. If it does, we hope the company will think of a better implementation for the desktop web, though on mobile, suggested tweets could be easily shown by swiping to the left.