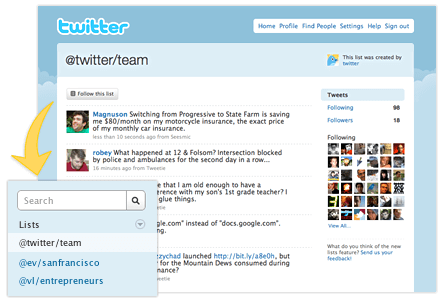 The lists will be linked from a user’s profile and they’ll be public by default. People can subscribe to the lists as they change and evolve. Twitter’s doing limited testing on the function for now, then will expand it out to the entire site later.

One plus of the new feature is that it will be much easier to find and follow interesting accounts. The downside? How to actually pay attention to all those accounts without getting your brain fried by thousands of tweets.

Twitter’s new addition may make a few independent projects built around the site obsolete. (Sorry guys!) TweepML launched a service like this three weeks ago and Lunch.com, the review site, rolled out its own Twitter list function today in fact.