We already knew that the micro-messaging service Twitter was growing at an impressive rate in the United States, but get this: It’s doing even better in some other parts of the world.

Take the UK for example. Traffic to Twitter’s website has increased 631 percent in the past year, according to new data from analytics firm Hitwise. Since January alone that growth is a huge 485 percent. It’s grown so much in fact that the Twitter website is now more popular in the UK than in the United States in terms of its web share for each country.

0.12 percent of all UK Internet visits are to twitter.com as of July 12. That is some 70 percent higher than the percentage share Twitter has in the United States. 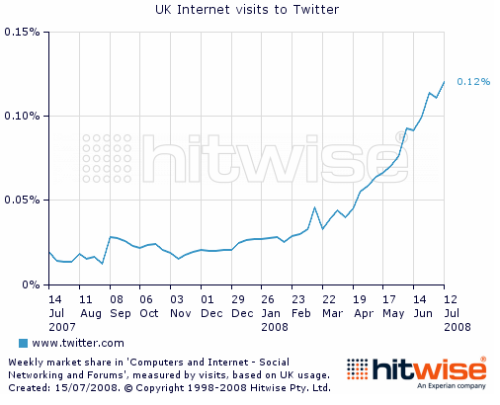 The UK is hardly the only overseas country seeing an explosion in Twitter usage. Tokyo, Japan is the city with by far the most tweets (Twitter messages), according to the tweet measuring site TwitterLocal. Today for example, people in Tokyo have sent almost three times as many tweets as the next closest city, New York (which interestingly is now more popular than San Francisco for tweets, despite San Francisco being the birthplace of Twitter).

Another Japanese city, Osaka, makes the top 10 list for most active cities in terms of tweets as well. Now you can see why Twitter would launch its own native version of Twitter in Japan.

Other international cities in the top 10 are London, UK (number 4) and Madrid, Spain (number 7). 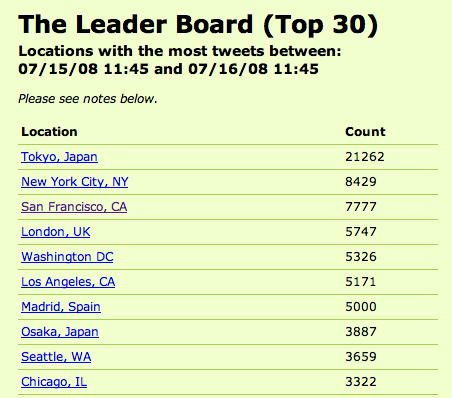 While the road to mainstream usage may be underway in the United States, Twitter is much closer to going mainstream in the UK, Hitwise argues. Twitter entered the UK’s top 50 social networking sites last week and the site is seeing near even male to female splits. Also interesting is that 37 percent of UK Twitter users are over the age of 45. That’s impressive.

Now Twitter just needs a good mobile site and/or application and this growth will explode even further.

It’s important to note that Hitwise’s data is only measuring traffic to the actual twitter.com domain. Twitter has a lot of traffic coming in from a variety of sources thanks to its APIs.