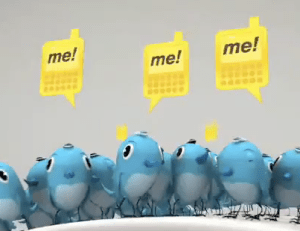 Twitter continues to expand into the mainstream. It’s already being used by a number of celebrities, it’s all over news channels, and its founders have even started making the rounds on various television shows like The Colbert Report. Now, Sprint has released a commercial, running across the country, that features the service — and also pokes a little fun at it.

“233,000 people just Twittered on Twitter,” Sprint says before continuing, “26 percent of you viewing this have no idea what that means.” You can probably expect that 26-percent number to shrink as the commercial continues to air and people Google Twitter.

Speaking of “Googling,” with this commercial, the word “Twitter” just took another step towards becoming a full-fledged verb as well. Of course, “Twittered on Twitter” sounds a bit odd, and perhaps Sprint meant to say “tweeted on Twitter,” but let’s be honest: Both sound ridiculous.

Also making an appearance in the commercial is the little blue bird that has become a sort of mascot for the service. Twitter co-founder Biz Stone is particularly pleased with this, as he and a long-time collaborator of his (someone named Phil), apparently drew it originally.

Find the commercial embedded below. The Twitter part starts about 34 seconds in.