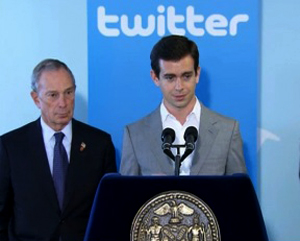 Twitter executive chairman and Square CEO Jack Dorsey joined Bloomberg on stage to announce the opening, coming at a somber time, since Apple’s Steve Jobs passed away yesterday. But Dorsey kept the conversation light and even offered Bloomberg a job, saying, “I know you have an engineering degree, Mr. Mayor, and you may be looking for a new job soon. We’re hiring.”

Dorsey said New York has a burgeoning tech community that can help the company with talent. He also noted that New York is the most active city on Twitter, so it the city is a natural fit for the company.

“New York has the most Twitter users of any city in the world and the biggest community of Twitter developers outside of California,” Dorsey reportedly said.

Maybe more importantly, New York’s connections to some of the biggest players in advertising could open new doors for the social media company in generating revenues. Twitter has more than 30 employees in New York already, but the new office at 340 Madison Avenue will be able to hold 100 people if the company wants to expand further.

Twitter’s integration into New York’s growing tech scene will no doubt be welcomed by other startup owners who want New York’s creativity and ingenuity recognized.