After four months of being slowly released, Twitter announced that its Periscope Producer service is now available to everyone, allowing broadcasters to incorporate high-quality live video from sources other than their mobile device — it’s supported on the web, iOS, and Android. 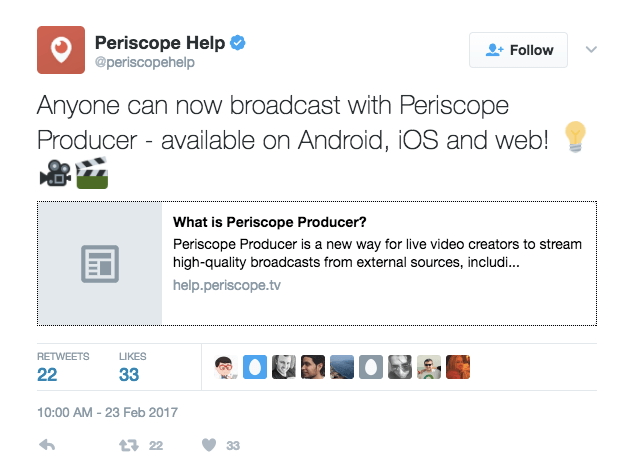 Above: Tweet from Periscope announcing availability of Periscope Producer.

Periscope Producer is a service Twitter created to let brands, media organizations, and other creators broadcast professionally produced, high-quality live video and incorporate it into the normal Periscope live video experience. “We wanted to enable the framework and groundwork to let people do the things we wouldn’t have the creative chops to explore,” Periscope chief executive Kayvon Beykpour once told VentureBeat.

Now creators can share video from external cameras, an Xbox One, virtual reality headsets, a computer, a webcam, or other devices right into their broadcasts streaming through Twitter. Live videos are done normally, but there’s a setting within Periscope Producer where arbitrary sources can be added, allowing third-party devices with a video output to be connected.

Broadcasters will need to have the latest version of Periscope.