Twitter revealed the latest piece of its advertising strategy today with a new feature called Promoted Accounts, where companies can try to attract more followers to their Twitter accounts by paying the microblogging startup for prominent placement.

It sounds like the feature will work the way All Things Digital reported last week. Promoted Accounts take advantage of the recently-added “who to follow” box, where Twitter suggests popular users who seem similar to the accounts you’re already following. Promoted Accounts will show up in the same box, and even though Twitter is getting paid to feature them, the company says it will still try to keep the suggestions relevant. 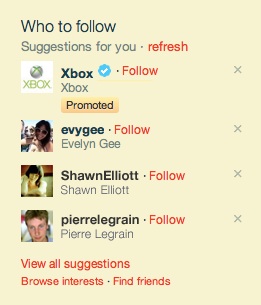 Twitter announced that it’s also increasing the visibility of its advertising products. It’s moving Promoted Trends, where advertisers can pay to feature a topic in the “trending topics” box, from the bottom of the box to the top, supposedly because, “We’ve been pleased with the quality of Promoted Trends and people are finding them useful.” And it’s making both Promoted Trends and Promoted Tweets available to outside applications, starting with HootSuite, so that they’re visible to the broader audience of Twitter users, not just those who visit the main website.

Twitter says it’s working with more than 40 advertisers and that nearly 80 percent of companies that have bought ads are returning to buy more ads after their initial campaign.