The Twitter mobile experience is getting infinitely noisier today. The information network is in the process of pumping up the volume on the amount of mobile advertising content it shows to users.

Twitter is adding Promoted Tweets, ads that double as tweets, to the mobile timeline inside Twitter’s iPhone and Android apps. Promoted Accounts, or the Twitter accounts that brands commission for additional exposure, are already being featured in both of the apps’ “Who to Follow” recommendation list. 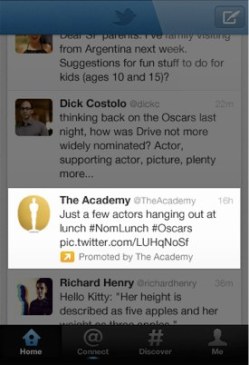 And there’s a fun bonus that Twitter thinks you’ll go nuts for. “Initially, a small number of users may see Promoted Tweets near the top of their timelines from brands they already follow,” the company said Tuesday in an announcement. “This will help ensure that people see important Tweets from the brands they care about.”

Altogether, the mobile app experience, Twitter said, is now on par with what users already find on the web.

Unsightly though the new ads may be for some users, the addition makes (dollars and) sense. A small majority, or 55 percent, of Twitter’s monthly active users access the information network via mobile device, meaning mobile is where the most money is to be made.

In fact, the proactive move makes mobile less of a risk for Twitter than it is has become for Facebook — unless you consider the potential to annoy people a risk.