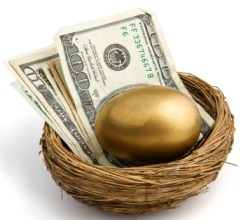 Twitter’s chief operating officer Dick Costolo has said that although the company’s new promoted tweets allow brands and businesses to buy special placement atop search results and hashtag streams, they are fundamentally different from advertising. The new feature launched yesterday.

“Promoted tweets are a way of enhancing the communications that companies are already having with users. It’s a combination of earned media and paid media in one place,” Costolo said, speaking at Twitter’s developer conference, Chirp, in San Francisco today.

To select a promoted tweet, brands can choose from their own account’s tweets or tweets that are from accounts affiliated with them. (They can’t just pick anyone’s tweets.) After that, those tweets can sit atop search results for certain keywords or special hashtags.

He said the company’s core revenue model came rather easily after he joined.

“We’ve always wanted to build a revenue model that is organic to the product itself and beneficial to the user,” said Twitter co-founder Ev Williams, who added that the company stalled for a long time to make sure it built a widely distributed product.

The challenge was that Twitter grew largely through its developer ecosystem and its users weren’t concentrated on its Twitter.com property, where an Internet company might traditionally monetize traffic.

“It had to be a monetization engine that worked everywhere the tweets went,” Costolo said.

Costolo said promoted tweets would only appear at first on Twitter.com and in search.

“We want to start out with a testbed if you will of impressions and inventory to see if we get this right,” he said. “When we have a sense of when it works well, we can roll out to the ecosystem and advertisers. We will make this program available to all our partners and to anyone who wants to use it. This will be 100 percent available in syndication.”

Developers will have the choice as to whether they want to implement promoted tweets in their apps.

Costolo gave a few examples of places promoted tweets might work. For example, when the iPad launched earlier this month, people were initially having problems with the tablet’s batteries. A company servicing Mac users could have paid for a promoted tweet that instructed people on how to fix the problem.

Once the ad system works on Twitter’s own site, the company will start the controversial part. Twitter will serve promoted tweets in user streams matching them to people’s explicit interests, as revealed by their tweet history. If I tweet a lot about coffee, I could be a great target for Starbucks ads, for example. Costolo referred to this concept as the “Real-Time Interest Graph.”

Twitter will only keep ads in the stream for a long time if they have acceptable “resonance” with users. Translated: Do they attract a lot of engagement from users? The company will consider factors like retweets, replies, #tag clicks, avatar clicks, link clicks and views after a retweet.

“Tweets that don’t resonate with users will disappear,” Costolo said.

So if a brand like Virgin Airlines authors several tweets, the few that attract the most attention should stay on Twitter’s service. And the ones that don’t should fall away. Companies can’t use other people’s tweets as promoted tweets and Costolo said the company is working on spam-fighting strategies to prevent brands from artificially boosting their resonance scores.

The company will initially price promoted tweets based on a CPM (or cost per 1,000 impressions) basis. But once it begins to understand “resonance” more, it will charge based on “return-on-investment” of those promoted tweets using resonance. More details on that should come later.

Costolo said the new revenue model was about “the entire ecosystem making money.” So the company is splitting promoted tweets revenue 50-50 with distribution partners.

Federated Media chief executive John Battelle, who moderated the on-stage discussion, asked whether Twitter would reveal how resonance works unlike Google, which has been quite secretive about the algorithms behind AdWords.

Costolo said they’d provide individual resonance reports to companies, but they’d probably keep the full mechanics of the system “close to the vest.”

One of the things that raises the hairs on Biz and Ev’s head is this notion that we’re a social media company. We’re a real-time interest graph. When I look at a person’s tweets, I can understand what they’re interested in. We think there’s an amazingly unique-to-Twitter interest graph that will be compelling to companies.”

When Battelle asked him how the “real-time interest graph” was different from Facebook’s concept of a social graph, Costolo stressed the public nature of Twitter.

Battelle also pressed Costolo on how many active users Twitter had. He said he couldn’t quantify it and probably wouldn’t be able to for awhile, since Twitter is a “consumption media.” Millions of people might read tweets either on the site, through clients or through widgets on external sites, but they might not author tweets. Battelle inquired further as to whether Costolo knew the number of users that were actively tweeting. Costolo said he didn’t know the number offhand.