Micro-messaging service Twitter has just rolled out an updated look to its web site. Gone is the tabs-based navigation along the top of your Twitter stream. It has been replaced with a right hand side nav.

Also new is that your latest tweet (Twitter message) has been placed right below the “What are you doing?” text input box. This information was formerly in the right column.

Now all we need is a search box, even if it just points to the newly created Twitter Search site which was formerly Summize.com. Also some kind of indicator letting you know when you have new replies and direct messages would be nice.

Oh yeah, and the restoration of IM capabilities and a good mobile site/app… 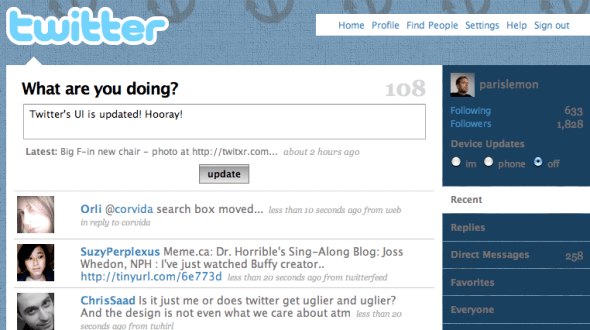 Update: And like that *poof*, the new site nav is gone. Apparently Twitter rolled it out a bit early.