Twitter search engines have sprouted everywhere this year. But they often list results by time published, stripping them out of context.

French developer Arnaud Meunier wanted to get around that, so he built a conversational search engine through his client Twitoaster.

Twitoaster keeps track of Twitter conversations; it shows who has answered your tweets and extracts images and links out of replies. It has a few neat little features: It ranks the Twitter users who have elicited the most replies and it returns analytics about conversations, such as charts showing replies by day or hour. It also boasts a few high-profile users including New York Times reporter David Pogue and Google’s Enterprise team, which uses the @googleatwork handle.

Meunier is launching conversational search on Thursday. It returns tweets about specific terms, like “love” or “coffee”, which you can expand to show the original conversation. Meunier’s conversational search doesn’t quite eliminate the noise problem (which no doubt will be hard for most real-time search engines to figure out), but it does help if you pull up replies and need to understand their context.

Twitter clients, which help users manage their accounts, have become increasingly sophisticated. Seesmic’s Twitter client and Brizzly, which was created by former engineers from the Google Reader team, both extract images while U.K.-based Tweetmeme also feeds back statistical charts showing Twitter activity. Why all the focus on Twitter statistics? The microblogging network has quickly evolved into a platform for businesses to interact with customers and potential partners, not to mention a real-time news service. Conversational tracking might be useful to a company trying to figure out what people are saying about it. (Twitter itself is hoping to sell commercial accounts with features like detailed analytics to businesses.)

Meunier has self-funded the project so far and is its sole full-time employee. 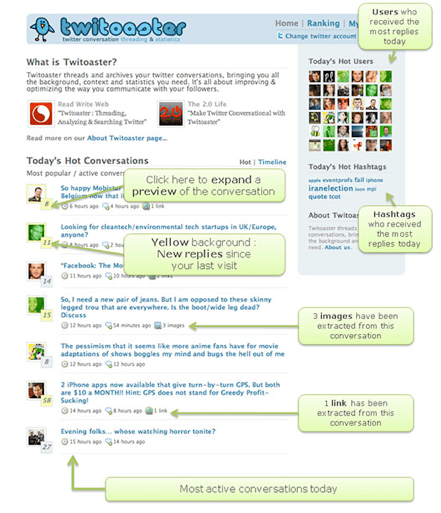