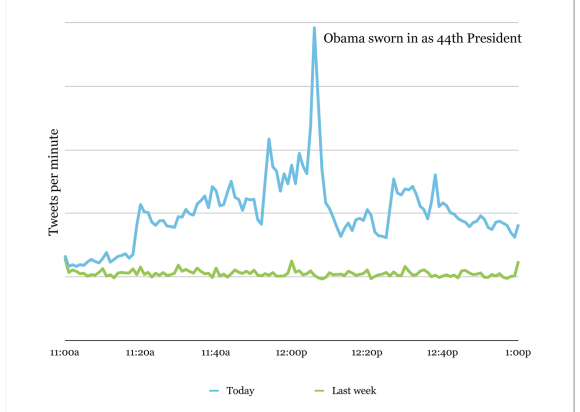 I stopped looking at Twitter sometime this morning when I realized that every tweet (Twitter message) for several hours seemed to contain the words, “Obama” or “historic.” Don’t get me wrong, I like our new President as much as the next guy, but the repetition was maddening. And the data coming in from Twitter now confirms the massive usage surrounding the inauguration.

Twitter saw five times its normal tweets-per-second and four times its normal tweets-per-minute during the inauguration, Twitter co-founder Biz Stone writes on the company blog. The high level of usage caused some delays of up to five minutes, but the service was able to stay up the entire time — something pretty remarkable when you consider that a Steve Jobs keynote address used to take the service down for hours. As you can see in the graphic above, usage clearly peaked right around noon EST, when Barack Obama was officially sworn in as the 44th President of the United States.

Twitter says it hopes to further study the data from today to help minimize delays during the next “shared global event.” Sadly, that’s probably more likely to be a disaster of some kind than an upbeat event like today.