Longtime users of the micro-messaging service Twitter may have noticed something around the start of the political primary season: A lot of tweets (Twitter messages) about politics. To some this is annoying, to others, it’s addicting. Tonight, Twitter will acknowledge how big the interest is around the topic of politics by launching a new sub-site to Twitter called Election2008, according to The New York Times’ political blog, The Caucus.

Starting at midnight, election.twitter.com will go live and will feature an interface that regular Twitter users will instantly recognize. There will be one major difference however. Gone is the famously outdated question “What are you doing?” (Twitter was initially just about people saying what they were doing); it’s been replaced with “What do you think?”

The idea of course, is to get people’s opinions on political topics, the candidates and larger issues like the economy. It’s no coincidence that the site is launching on the eve of the first debate between Democratic Presidential candidate Barack Obama and Republican candidate John McCain. Twitter has made note of the surges it’s seen during the primary debates and more recently the DNC and RNC national convention key speeches. 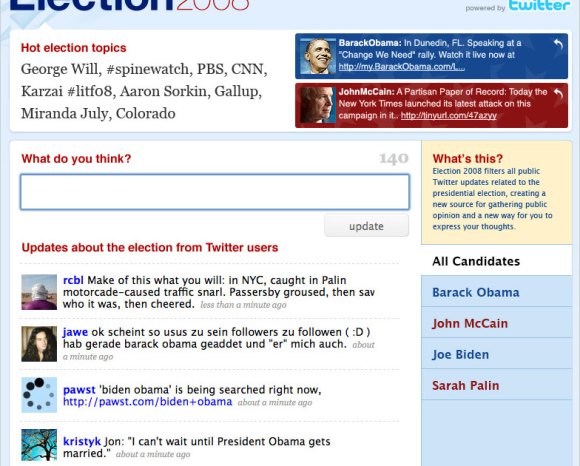 Of course, if McCain has his way, there won’t be a debate tomorrow night — so you can expect a lot of tweets about that on Twitter’s election site if nothing else.

The new site will let users easily filter for messages related to certain candidates. It will also highlight tweets from the candidates themselves (or at least their representatives).

I asked Twitter how exactly the new election site will tie in to Twitter proper, and Twitter chief executive Jack Dorsey confirmed that any tweets made on election.twitter.com will tie into the regular Twitter site, so those who don’t make the jump to the new site won’t be totally left out of the action.

Twitter’s election site seems like a logical extension of something that was done earlier this summer to get answers for people’s political questions. Representatives from both sides took questions from Twitter and answered them — all within the service’s signature 140 characters.

This new site also seems influenced by ones that came before it. Politweets for example, has been tracking and sorting political discussion on Twitter for several months.

This year’s Presidential race is becoming increasingly about the web. Social network Facebook just launched a way to register to vote online, social voting site Digg has been heavily involved in political discussions with the major parties, and Google has been doing various things with its properties including YouTube to spark interest in voting. Twitter itself has another deal in place with CurrentTV to have tweets integrated into television coverage of the debates. Plenty of other sites out there are doing their part as well.

Surprisingly enough, after months of domination on the Internet, Obama seems to have yielded a bit of ground to McCain as of late. But the trend still seems clear that the web is a home turf of sorts for the Democratic Presidential candidate.