There was a fair amount of debate and discussion heading into this year’s SXSW (South By Southwest) Interactive conference as to what would be the hot new app that everyone would be using. At last year’s show it was the online messaging service, Twitter, that rose to prominence. Well guess what? This year’s Twitter was — Twitter.

The graph down below, placed on the Twitter blog today, gives a good indication of just how much usage has increased since last year when it exploded onto the scene. The graph tracks the use of the term ‘SXSW’. It also nicely points out what was going on in the conference during the peak times of term traffic. Not surprisingly, the controversial Sarah Lacy/Mark Zuckerberg Keynote drew the highest number of tweets (Twitter messages) related to ‘SXSW’.

While many are quick to jump on the FriendFeed bandwagon now (which we’ve been on for a few months — our coverage — and some of us even longer) and say that is the service that gained popularity at this year’s SXSW, the massive influx of friend notifications in my inbox didn’t start until after I was already back home from the conference. That spike was almost certainly kicked off by the massive amount of talk about the service the past couple of days — as seen on Techmeme. 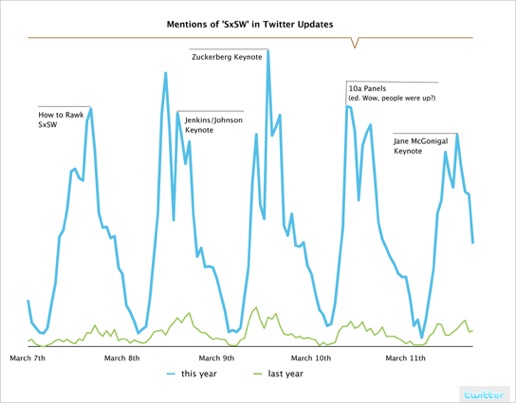 [Above: A graph showing the usage of the term “SXSW” on Twitter this year (blue) compared to last year (green). Find a larger version here.]

On the ground at SXSW, everyone was still using and talking about Twitter. If you walked by a person with their nose buried in a smartphone typing quickly, you knew what they were doing — because you saw their tweet show up a few seconds later on your own phone’s screen (which was naturally set to browse Twitter as well).

Gabe Rivera, the founder of Techmeme, and a few others successfully predicted that “this year’s Twitter is: Twitter” — and they did so where else but on Twitter.

Kudos really needs to be given to the Twitter team which was able to keep the service up with an exceptional 99.97% uptime during the conference. This lies in stark contrast to the experience many users had suffered through the past several months with the service’s downtime woes (our coverage).