Last month, micro-blogging site Twitter went mainstream, at least according to my own litmus test: The hosts of my local radio station here in the Bay Area talked about a guy who lost his job offer from Cisco for tweeting how he hated the job. And my hairdresser told me she finally was on Twitter, after saying in February she’d never heard of it. Twitter is everywhere.

And now, in April, Twitter is going one step further: It’s taking over business collaboration software.

Today, at the Web 2.0 Expo here in San Francisco, a company called Bantam Networks released a private testing version of its software workspace for small and medium sized businesses, in which Twitter updates by co-workers are included within your online dashboard that also includes a broader stream on online activities and corporate workflow. Bantam offers its service as a paid subscription.

It’s similar to Yammer, which is a private Twitter stream among company co-workers, the difference being that Bantam extends beyond micro-messaging to include other activities. 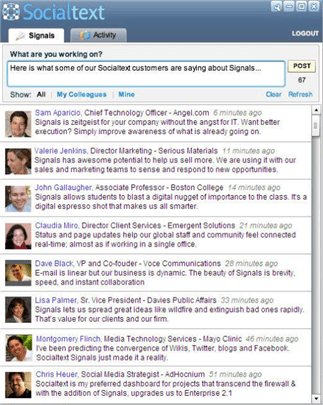 While Yammer was an early player bringing Twitter-style messaging to companies, we’re now seeing a fire-hose of Wiki and other collaborative software companies scrambling to offer the same Twitter-like functionality.

Separately today, Socialtext, another company that has been building business collaboration software for years, announced at Web 2.0 it has launched a desktop computer version of its software that also includes Twitter-style microblogging. Called “Socialtext Signals,” the updates are very similar to Bantam’s features. They place Tweet-like updates from employees on a single dashboard next to the other activities they’re engaged in, including things like profile updates or other forms of social networking. The desktop version, based on Adobe AIR, makes Socialtext’s software all the more faster than other collaborative platform companies, most of whom don’t have a desktop version.

Separately, Socialtext’s founder, Ross Mayfield, told me the company has raised another $4.5 million round of capital from existing investors, including Draper Fisher Jurvetson, Omidyar Network and others. He also said the company has laid off six workers, reducing its workforce to about 34.

Incidentally, I was a judge on the “Launchpad” session today at Web 2.0, where four other companies besides Bantam presented:

PhoneGap — This company won the audience favorite vote. It provides a way for web developers to build fast, easy mobile applications with HTML and Javascript and still take advantage of native mobile device capabilities like geo-location, camera, vibration and sound. It runs on the iPhone, Android and Blackberry. Today the company released an emulator that lets developers see what their application will look like on each phone. PhoneGap, which launched last August, is a product of Nitobi, a ten-year-old company.

zeaLog — This company was a close second for the audience award. It lets people track things online such as their weight, sleep patterns, smoking habits and even sexual activity, so they can follow their personal progress. It lets users share their progress with others who are trying to reach similar goals. It also has an API that lets other companies build on the data.

DubMeNow — This company gives you an easy way to exchange business contact information from your mobile phone. You text someone your contact information, and then whenever you change your personal information, it gets updated automatically within the other person’s contact list. It works on any phone, and you can save the information of your contacts either to just your phone, or to your phone *and* the cloud. It’s compatible with Outlook, LinkedIn and CRM apps. (This company placed dead last in the popular vote, but oddly it was my personal favorite of the bunch!)

80legs — This company gives organizations a way to crawl the entire web and analyze it by looking for specific keyword mentions or other data. The company presented an example of how it could look for all images of Barack Obama. It will probably face competition from players like Amazon, but its executives said it will be able to perform its tasks at a lower price. It will allow developers to crawl up to 2 billion pages a day, at $2 per million pages crawled and $0.03 per CPU-hr used for analysis.