During a press briefing at the 2020 Consumer Electronics Show, executives from Twitter outlined policy changes that’ll affect the social network’s over 330 million users in the months to come. Twitter product lead Kayvon Beykpour focused on three core tenets in his presentation: health, conversations, and interest.

“Public conversation is only valuable if it’s healthy enough that people would want to participate in the first place,” he said. “[We need to] ensure the integrity of the information that people are consuming on the platform is high.”

On the conversations side of the equation, Twitter plans to take different parts of conversations and stick them in a sleeker, slicker global view on mobile platforms. Bits like users’ names, their verified statuses, and more within tweets will populate a Reddit-style tree layout, making it easier to follow ongoing threads.

Perhaps more significantly, Twitter intends to roll out controls over conversation dynamics, which sometime in Q1 2020 will allow users to choose who’s able to reply to a given tweet: Global (anyone on Twitter), Group (a group of people you follow and mention), Panel (people you specifically mention in the tweet), or no one. Twitter calls this last option Statement, and it says they’ll be denoted by an icon in the lower right corner indicating that the tweet can’t be replied to.

Suzanne Xie, who joined Twitter by way of last year’s Lightwell acquisition, said that the intention is to make users feel safer when chiming in. “We’re really excited about this, because not only does it help people feel … more comfortable as a … community, but also [because it] allows us to create a whole new format of conversation,” she said.

The changes build on Twitter’s moderated replies feature, which allows people who start conversations to hide replies to their tweets. They appeared first in the Twttr app in late 2019, the beta app used by the social network to pilot changes before widely debuting them. Other functionality recently tested includes visuals intended to make replies more distinguishable from strung-together tweets and color-coded and nested replies. 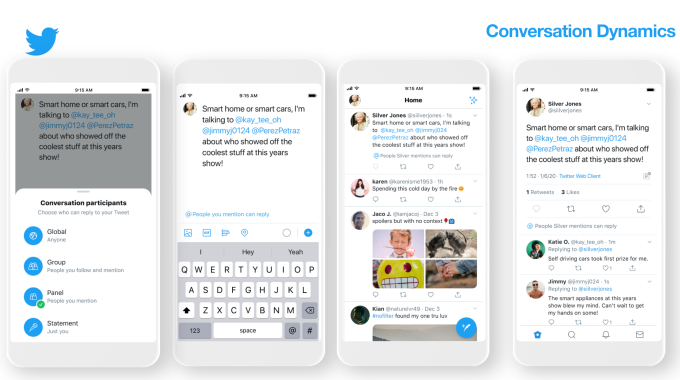 Where topics are concerned, Twitter — which introduced the ability to follow topics last year — says it’s growing the total number of followable topics on the network. Nearly 1,000 are available in multiple languages today (up from 300 in English at launch), all of which are curated by Twitter based on popularity. As for lists, or groups of Twitter accounts that show streams, they’ll soon gain a new discovery page that’ll recommend those of topical or personal interest.

Interestingly, Twitter says that it’s not making available any political topics for consumption — product manager Rob Bishop says that the company is studying the potential effects of this before considering a public roll-out. He also says the company is improving its ability to algorithmically detect events happening around the world, as well as the filters it consults to ensure topics don’t run afoul of community guidelines.

“We’re trying to lead by example … in terms of earning interest of our customers with every decision that we made,” said Beykpour.

As of October 2019, Twitter said it now removes half of all abusive tweets proactively, without relying on anyone to report them. (That’s double compared with the year before.) According to the company, the increase was largely attributable to “improving our machine-learning models in Q3 [2019]” to detect potential policy violations, even though these policies don’t always apply to everyone equally.

“We have very clear rules around these things, [and] we’ve started to make a lot more proactive progress in terms of removing [tweets in violation of our rules] before customers even see [them],” said Beykpour. “The most egregious forms of abuse are pretty clearly identifiable, and those are the things that we’re able to make proactive progress on the surface.”

Tamping down on misleading or otherwise toxic political messaging is another area in which Twitter has invested outsize development time. It recently banned political advertising about campaigns and legislation globally on the platform, a decision it justified by asserting social media platforms shouldn’t profit from elections or politics in general.

Some of its efforts have met with mixed reviews. Last year, the company rolled out a controversial “hide replies” feature that allows users to curate responses to their tweets, raising the risk that high-profile figures such as politicians will whitewash responses to dubious claims they make. And in July 2019, Twitter began testing a feature in Canada that allows users to hide replies to their tweets, requiring those who wish to see and engage with them to tap on a gray icon.

In tangentially related news, Twitter announced that will again broadcast the Oscars and Grammys pre-shows in partnership with ABC and CBS, respectively. It’ll work with NBC separately to spotlight clips from the 2020 Summer Olympics. And it says that its NBA content deal, which includes livestreams of games and exclusive footage, will expand with a multi-year deal that’ll cover 20 NBA games and highlights from those games, localized for each country.

Historically, video content has been a revenue driver for Twitter. The company’s Q4 2019 revenue totaled $909 million, up 24% year-over-year, with video ads representing more than half of its ad sales.