Maybe when it’s over 70 times longer than it was for 10 years? When rumors broke about Twitter’s potential shift from its historic pithiness to long-form tweets of up to 10,000 characters, it grabbed the attention of the entire tech, business, and marketing world. Twitter users such as myself have become programmed to think and operate in a world of 140 characters. Twitter forces us to be succinct, punchy, and creative with words and visual content. 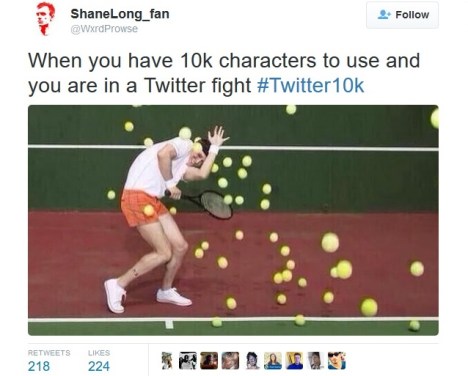 Above: One’s user’s response to the possible change.

They say if it ain’t broke, don’t fix it. But in the immediate aftermath of Twitter’s proposed 10,000-character news, sentiment was divided on the web. Yes, change can be scary for those of us who use Twitter every day, but it’s also no secret that Twitter has been driving hard to increase revenue and user growth. With its 10th anniversary coming up in March, Twitter10k might just be the solution it’s been looking for, despite the major waves this potential change is already causing.

Before I take a look at the potential impact of Twitter10k (and P.S. it’s extremely unlikely the proposed 10,000 characters would ever fully be shown in a user’s Twitter feed), it’s worth remembering the two core factors that made Twitter popular in its early years: real-time trends and, later, celebrity adoption.

We all remember how news and images of the Hudson River plane crash saturated Twitter in real-time long before the established media caught up with the news, and the rest is history. For celebs and public figures, Twitter provided a large global stage on which to converse and engage with fans through carefully choreographed yet (seemingly) authentic tweets that didn’t require the involvement of a publicist or manager. And they were easy to compose at just 140 characters.

So, here’s how I see the pros and cons of this potential shift panning out for publishers, marketers, and general users:

1. Twitter10k will create a world of “read more” tweets, which will motivate publishers and media to post ever more articles and content to Twitter, adding additional context and detail. This will further Twitter’s position as the source for breaking news in real time.

2. With more and longer content, Twitter will become the one-stop shop for readers seeking news and information sharing, while retaining all its conversation and engagement features.

3. Twitter could transition to a qualitative writing and content platform rather than a simple micro-blogging platform. The natural extension of this is embedding videos and images similar to what we see on platforms like Medium and Facebook.

4. For marketers, product developers, and business professionals, there’ll be a huge increase in the volume of social data and insights that can be tapped and applied through social listening and analytics. More content = more data = more actionable insights

1. Publishers are still grappling with the new reality of the shift to distributed content, which is demanding they push content into users’ social streams via platforms like Facebook Instant Articles, Apple News, and the like. This counters publishers’ traditional model of driving traffic (and advertising dollars) to their web properties. Twitter10K will undoubtedly compound this challenge and force media properties to decide whether or not to publish longer content to Twitter as opposed to a tweet with a link back to their site.

2. With the addition of more content, engagement in the form of replies and retweets will inevitably take a hit. This won’t bode well for publishers or brands, which use social as a platform to keep the conversation going rather than bring it to a screeching halt.

3. Breaking news just doesn’t align with verbosity. The 10,000-character limit is not effective for the real-time global event coverage that Twitter is known for — after all, marketers and journalists are now in the business of thinking about whether something is “tweet-worthy”.

4. Why bother? Twitter users won’t take kindly to the implied suggestion they should be writing more. Media outlets and journalists will still be as succinct as possible when writing headlines and sharing breaking news from the frontlines. The faster and more quickly they get their point across, the more likely they are to scoop the story first.

Here’s my take: Ultimately, if 10,000 characters was the magic bullet, then Google+ would have been much more popular and more celebrities would publish content on Medium. It isn’t, and they don’t.

Unless this format upheaval is just one component of some amazing multimedia integrations (which let’s face it, it very well could be), it looks like a fun idea but a real business gamble from where I’m standing.

Will McInnes is CMO of social media monitoring platform Brandwatch.