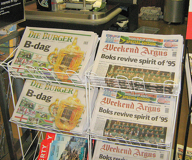 Yesterday, we noted that despite its mid-June hiccups, Twitter’s growth appeared to accelerate towards the end of the month. Today there is more evidence of that growth — and it’s even more impressive.

After several weeks of only modest growth or even decline in its U.S. web market share, Twitter has seen huge growth since June, according to new data from analytical company Hitwise. In fact, Twitter now stands at its highest point ever, with its site accounting for .0024 percent of all web traffic in the United States. Compare this to January when that number was below .0005 percent. That is also 500 percent higher than Twitter’s market share was at this time last year.

Impressive as well is Twitter’s growth when compared to its rivals. Plurk, another micro-messaging service has plunged in web presence since its peak in March. Its site now accounts for .00020 percent of web traffic. FriendFeed, which Hitwise rightly notes isn’t really a direct Twitter competitor has been growing, but still accounts for only .000061 percent. Another competitor, Pownce, can barely be seen on the chart (below), with only .000013 percent.

It’s important to note that this data only takes into account Twitter’s actual website at twitter.com. Users piping data into Twitter through mobile means or third party sites are not counted.

So what does this all mean? It means that despite Twitter’s awful month of June in which the site was either down or not working properly for a rather large percentage of the time, Twitter is continuing its march towards potential mainstream viability.

All the headlines it made in the tech world for its problems perhaps exposed it to some new users.

The service had a great week in terms of performance and improvements that it made. It is also now said to be closing in on a deal to buy the Twitter search site Summize. 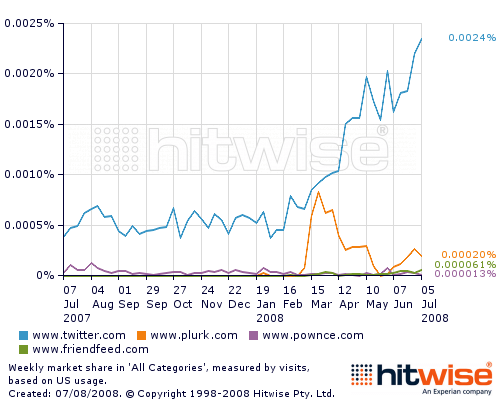