Twitter’s IPO is probably less than 90 days away, and the social media purveyor of the now is still rapidly growing. Not always, however, in predictable ways.

Especially not in Berlin.

Some countries like Germany, South Korea, and Australia really don’t get the Twitter phenomenon, resulting a low penetration rate, data consumption app Onavo’s August report shows. Only 8 percent of Germans use Twitter on their iPhones, and 11 percent of Koreans. Others, such as Indonesia, Mexico, and South Africa, are on the forefront of the Twitter revolution in messaging, with 64 percent of iPhone-toting Indonesians using the service: 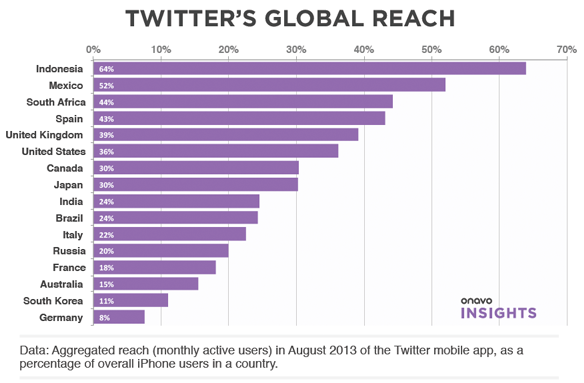 The fault, apparently, is Apple’s:

“Twitter has the most reach in developing countries, where iPhone usage is sparse,” Aaron Endré, an Onavo representative told me. “As iPhone usage becomes ubiquitous, as in the U.S. and Western Europe, the actual number of Twitter users increases, but is a smaller proportion of the overall iPhone population.”

Onavo helps smartphone users understand their data usage, and its data gives us a picture of what iPhone-using Twitter fans are doing. But understanding how Twitter is inversely correlated with iPhone penetration is a little harder. Apple has integrated Twitter into its iPhone operating system since last year, and just recently the companies cooperated to such an extent that mobile Safari’s shared links feature shows links that people that you follow have recently tweeted.

One real positive for Twitter as it prepares for an IPO is the age of its users.

Twitter users — and especially Vine users — skew young. That’s good, because it indicates a growing userbase — and stands in contrast to Facebook. While Facebook’s userbase has been graying for years, and there are recurrent alarm bells that “the kids are leaving Facebook,” Twitter’s users twice as like as Facebook users to be 18-20: 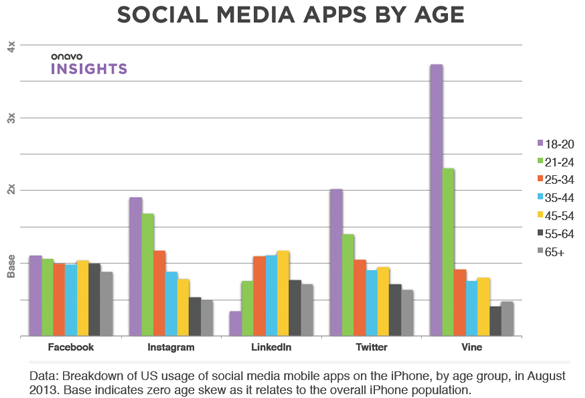 One thing Vine doesn’t do, however, is extend Twitter’s overall reach very much.

“Although Twitter has 36 percent reach and Vine has 17 percent reach, their combined reach is only 42 percent,” Endré said. “Thus, Vine only adds 6 percent ‘non-overlapping’ reach. This is mainly due to the overlap in customer segment that both Twitter and Vine have.”