No matter what you think of Ellen’s selfie, it’s hard to deny the impact the Oscars had on Twitter this year.

Twitter revealed this morning that tweets about the Oscars were viewed more than 3.3 billion times between 5 p.m. Eastern on Sunday and 5 a.m. Monday morning. But perhaps even more impressively, Twitter notes that those tweets reached 37 million people overall — not too far from the 43 million people who watched the show on ABC.

The usefulness of Twitter during live events isn’t anything new — rather than sitting back and consuming content, Twitter lets you become an active participant. But while Twitter’s viewership is steadily increasing, the number of people sending tweets is still significantly lower. When it comes to the Oscars, Twitter says only 5 million people actually sent tweets related to the event.

Twitter created an infographic to demonstrate the impact of Ellen’s Oscars selfie, which became the most retweeted post within just a few hours (and now sits at an astounding 3.2 million retweets). Ellen’s tweet was viewed more than 32.8 million times (before 5 a.m. Eastern on Monday), which includes 26 million views across Twitter’s apps and sites, as well as 6.8 million views via website embeds. 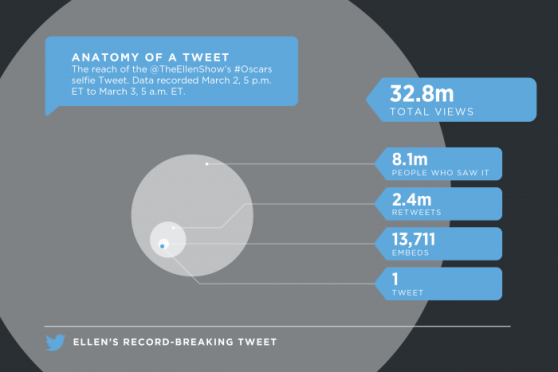