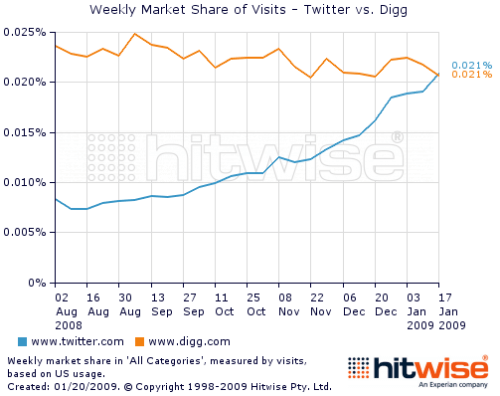 Twitter, as we all know by now, is growing fast. And for the first time last week, its website’s market share of visits in the U.S. surpassed that of another hot Internet startup, Digg, according to numbers from the analytics firm Hitwise.

Twitter.com’s growth since December seems to be exploding, and it went even higher this past week, no doubt thanks to the tweets (Twitter messages) and incredible picture taken of the US Airways plane crash that was uploaded to Twitter (via Twitpic), as Heather Dougherty, Hitwise’s director of research notes in her post.

Both Twitter.com and Digg.com now control just about 0.021 percent of all web traffic in the U.S., according to the data. Twitter has a slight edge and is now the 84th most popular site in terms of market share versus Digg, which is the 85th. One reason for the growth is Twitter’s expanding reach in the 25-34 year old demographic, but also thanks to its integration with other social media sites on the web such as Facebook and MySpace. While Digg relies very heavily on Google search traffic (nearly 39 percent), Twitter’s Facebook traffic nearly surpasses its Google traffic (8.82 percent versus 9.23 percent).

And it must be noted that most of Twitter’s activity still comes from outside the website. Back in July of last year, then-chief executive Jack Dorsey noted that Twitter’s application programming interface (API) receives 20 times the amount of usage that the main twitter.com website gets. So these numbers, while interesting, don’t paint a true picture of usage.

For much of the past year, talk has centered around Twitter going “mainstream.” That is, “normal” people, and not just the tech elite in Silicon Valley, using it regularly. Some believed that would never happen. Others, like myself, disagreed.

Two of my friends from college who are not involved in the tech industry in any way just signed up for Twitter this week. My mom visits the site daily (yes, mainly for updates about me, but still). Many of the mainstream news sources covering President Obama’s inauguration today had some kind of Twitter presence — and yes, Twitter saw another explosion in usage.

I think we’re seeing Twitter’s “mainstream-ification” happen in front of our eyes right now, but we’re too busy tweeting to notice it.

Update: A few sites are now questioning Hitwise’s numbers since other measuring services like Compete (which is usually much more unreliable) show a large discrepancy between Twitter and Digg’s visitors. But all of that looks past perhaps the key issue which I briefly mentioned above: Who cares what Twitter.com’s traffic is? Many, many more people interact with the service through its API than through the site itself, so its traffic, while interesting, isn’t really all that important.