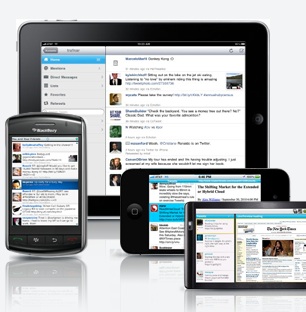 The landscape for Twitter applications may be changing, but that hasn’t scared investors away from UberMedia, the owner of apps like UberSocial, Echofon, and Twidroyd. The Pasadena, Calif. company just announced that it has raised $5.6 million in new funding.

UberMedia had a couple of notable run-ins with Twitter in the past few months. Back in February, Twitter blocked some of UberMedia’s apps, saying they violated Twitter’s terms of service. (After UberMedia made some changes, access was restored.) The companies were apparently competing to acquire TweetDeck, a popular desktop Twitter app. CNN even reported that UberMedia was working on its own microblogging service to rival Twitter’s.

That last rumor is untrue, according to chief executive, founder and well-known entrepreneur Bill Gross. UberMedia is only interested in building apps on top of Twitter, not creating a service of its own, he said. At the same time, Twitter has been encouraging developers to build things like publisher and curation tools, rather than consumer apps for using Twitter, because Twitter would rather build those apps on its own. As CEO Dick Costolo put it at the D9 conference yesterday, “We’re encouraging the ecosystem to move up the value chain.”

So even if UberMedia isn’t building a Twitter rival per se, it’s still competing with apps built by Twitter.

“It’s completely reasonable for Twitter to compete with anyone in their ecosystem, as long as it’s a fair competition,” Gross said.

He added that one big way UberMedia differentiates itself is by serving users who are more Twitter-savvy. He hesitated to embrace the term “power user”, and instead described UberMedia users as those “who want specific, customizable functionality.” Serving those users can mean adding features like LivePreview to Twidroyd, But it can also mean building something like A.plus, a Twitter app for fans of actor Ashton Kutcher, which features unique content from Kutcher. UberMedia says it now has 5 million users who collectively publish 200 tweets per second, adding up to 13 percent of all tweets on Twitter.

So why raise money now? It was only back in February that UberMedia announced its most recent round led by Accel Partners and Index Ventures (a deal that brought Accel partner and early Facebook investor Jim Breyer onto the UberMedia board). Gross described the funding as strategic, saying the main motivation was the connection with Burda Digital, the firm that provided the funding. Burda has invested in more than 50 digital media companies in Europe including Xing and Etsy. Working with Burda should help UberMedia connect with potential partners as it tries to expand into Europe.

As for Twitter’s Tweetdeck acquisition, Gross said he loves the product and acknowledged that he made an offer to acquire the company. Twitter beat him out for the deal, but Gross said, “If they keep it alive, it’s fantastic.”