How powerful is Al Gore? So powerful that he can make Twitter change his name and move all of his followers over to the new profile, without anyone even noticing. That’s what happened tonight, as the artist formerly known as al_gore became algore, Twitter chief executive Ev Williams confirmed in a tweet (Twitter message).

While the new name may make more sense to people looking for the former vice president (since no one likes to type underscores), it could also lead to even more confusion about just which account is really Al Gore’s. The day before the real Al Gore signed up for Twitter an account with the name (get this) TheRealAlGore popped up and started friending people at a rapid clip. A lot of users were confused if this was really Al Gore, and so the following day when his al_gore account popped up, some didn’t know what to believe.

Of course, then al_gore got 15,000-plus followers in no time. Now they’re all algore’s — al_gore is now a lonely place with no followers and only one sad tweet: See http://twtter.com/algore. 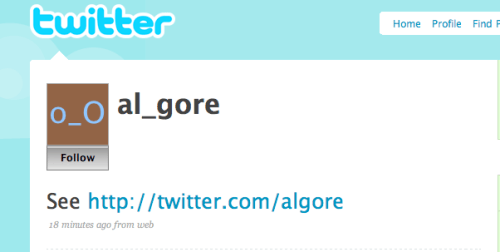