Before events were posted on Facebook, the place to find social activities on the internet (back in the early 2000s) was Upcoming.org. Founded by Andy Baio, the site combined an event calendar with social networking, and everything was primarily sourced from the community. Two years after Upcoming.org was founded, Yahoo acquired it in an effort to beef up its local content. But that experiment failed, and in 2013 Upcoming.org was shuttered.

Months afterward, Baio purchased the domain back and launched a Kickstarter campaign in a bid to revive the service. He raised $30,000 in 90 minutes, ultimately receiving over $100,000 in donations. Four years later, and the site is back up and running, having been completely rebuilt from scratch. The events archive has been fully restored and is ready to accept your next events.

A look at the new site indicates that it’s been completely modernized — this isn’t the Upcoming.org from 2003 — and you can log in using your Twitter credentials to add events. But this is far from being a completed version of the service, as there are plans to add more social tools, such as following and unfollowing, adding new venues, providing trip support, deleting events, search, providing developer tools (like REST API and JSON views), profile management, exporting your history, embedding, exporting to calendar, and safety measures. 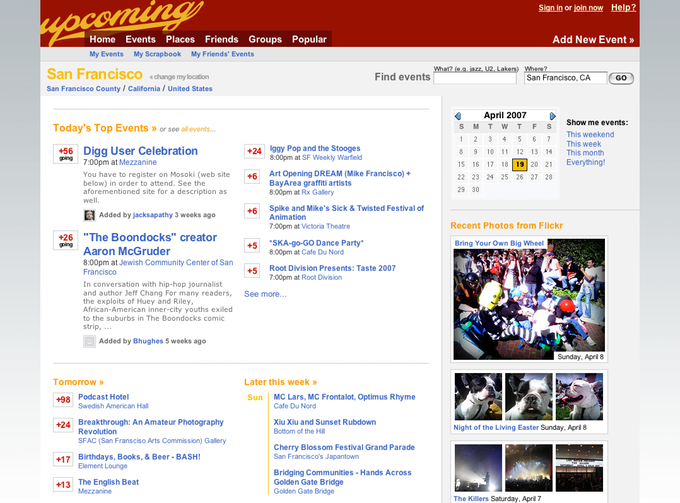 It’ll be interesting to see how well the new version of Upcoming.org fares, since there is currently no shortage of places to find events — from Facebook to Eventbrite. The former launched a standalone Events app in October and has implemented new features to crowdsource things to do. But with a modern twist on the old service, could Baio also be including data and content from third-party applications — such as location data from Foursquare, ride support from Lyft and Uber, and more? There’s a lot more work involved, but Baio appears excited about the future of this legacy service that he has breathed new life into.

Phew, that last sprint was a long, hard slog. But I’m SO EXCITED to see where Upcoming goes, and to get back to @waxy, starting Monday!

It was clear that Baio wasn’t happy to see Upcoming.org go the way it did. When Yahoo opted to shutter the service, Baio penned a post describing his feelings. “…in Yahoo’s typical fuck-off-and-die style, they’re doing it with 11 days notice, no on-site announcement, and no way to back up past events. I knew its closure was inevitable after the infamous sunset slide, but never knew when it would happen. Like a newspaper prepping for a sick celebrity, this obituary’s been sitting in my drafts folder for months, waiting for its sad publication day.”

Baio claimed that after his departure from Yahoo, along with those of his cofounders Gordon Luk and Leonard Lin, the site fell apart, with social features “minimized, or removed entirely” and a proliferation of spam left unchecked. “Yahoo seemed like a perfect home for Upcoming — they’d promised resources to grow the community, we’d get to work at a promising tech giant with some of our favorite people, and the acquisition price was small but seemed fair. Coming into Yahoo, we were hopeful,” Baio explained.

He described Upcoming.org’s acquisition by Yahoo as “a horrible mistake,” so it’s understandable that Baio would repurchase the domain and relaunch the site. Perhaps he’ll get a chance to fulfill his vision of it being a great place for people to find local events, tap into new communities, and hold impromptu gatherings.