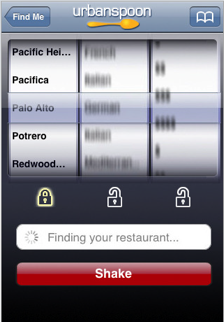 One of my biggest pet peeves with the iPhone App Store is the paid apps that offer the same functionality as free web sites. Why should I pay to access information when I can just look it up using the mobile Safari browser? Apps like theNextTrain, which gives users quick access to Bay Area train times, may be worth the $4.99 for some daily commuters. But I’m cheap, and I’ll go through the hassle of typing icaltrain.com into Safari, thank you very much.

That said, I have found app redemption — a free iPhone app that far surpasses the value of the actual site, called Urbanspoon.

Urbanspoon, the web site, is of the run-of-the-mill restaurant review ilk. You can search for restaurants in your area, read both user and professional reviews, and get basic restaurant information (including a link to the menu in some cases). This is all useful, but it’s not anything I can’t get from CitySearch or Yelp.

Urbanspoon’s iPhone app, on the other hand, is one of the most used apps on my iPhone (and I’ve barely touched Yelp’s). Just like the site, you can browse and search restaurants, but the principle feature is a restaurant slot machine. You can choose to lock location, genre and/or price; then just give your phone a shake. It randomly generates a nearby restaurant and lets you check out information and reviews.

This is the perfect tool for anyone who has difficulty making decisions, as MG wrote back in June. My friends and I are constantly having the debate: Where do you wanna eat? I dunno; where do you wanna eat? This both resolves the issue and lets users discover restaurants that may not otherwise float to the top on a review site.

Apparently MG and I aren’t the only ones who have difficulty making dining decisions. The app has been downloaded around 500,000 times since launch and has seen about 15 million shakes. 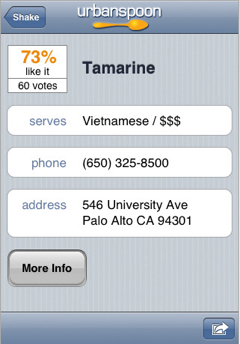 Despite my obsession, I’ll admit the app isn’t perfect; there are still a few features I’d like to see. I’d like to be able to lock more than one option at a time (for example, generate a Thai or Chinese restaurant in Menlo Park, Palo Alto or Mountain View). It’d also be cool to be able to lock the rating as well (i.e. generate only restaurants with a 75% approval rating or higher).

Even still, I have difficulty understand why this slot machine functionality isn’t a feature on Urbanspoon’s webpage. I’m usually at home when deciding where to go out to eat anyway, so it’s not as though I need it to be mobile. Sure, I’d miss the cool feeling of getting to shake my phone to activate the slot machine, but I know there are a lot of non-iPhone users out there who’d love to use it—and may even switch over from other sites to do so.

I contacted Ethan Lowry, founder of Urbanspoon, with my query, and informed me that it’s “in the works,” although their small team is currently prioritizing improvements to the iPhone app. Let’s hope for the sake of indecisive people everywhere that he means it.

Urbanspoon is a free download from the App Store — but a few more of these features and I might be willing to pay for it. You can find it here.