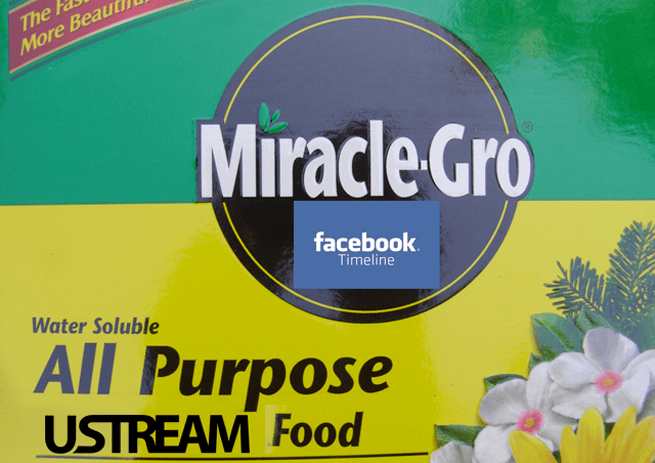 If you want to rapidly grow plants at an alarmingly fast and unnatural rate, you give them Miracle-Gro. But if you want to do the same to digital media services like Ustream, you might just need to integrate with Facebook Timeline.

Just one week after launching a new Facebook Timeline app, live video streaming service Ustream has doubled the number of new user signups per day, from 10,000 to more than 20,000, the company tells VentureBeat.

The new Timeline app allows users to share any live videos they’re watching on Ustream within their Facebook Timeline. Provided they have permission, all of your Facebook friends can also watch along in real-time, which is likely to boost the level of conversation about said video in the same way it would for a room full of people crowded around a TV screen.

Ustream confirmed the major social activity increase, telling VentureBeat that it generated more than 10 million impressions of Timeline shares on Facebook during the first week the app was live. Mind you, this is traffic that otherwise didn’t exist prior to launching the Timeline integration. That’s quite an impressive boost, especially considering the higher rate of new users registering for Ustream accounts.

The company said it also plans to integrate the site’s own Social Stream — not just live video — into Facebook Timeline, which should provide an even greater boost of social activity.

And while Ustream is one of the first live video services to offer integration with Facebook’s Timeline, other video sites like Viddy and Vevo have also experienced huge growth, as VentureBeat’s Jolie O’Dell previously reported. In fact, it seems that all kinds of digital content services are experiencing the Timeline bump. Both streaming music startup Spotify and community news sharing site Digg reported rapid growth soon after launching Timeline apps.