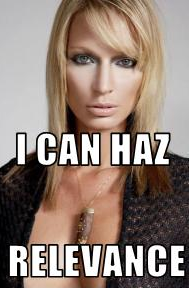 Cohen, who graced the covers of Australian Vogue and Elle in the early ’90s and has modeled for Armani and Dior, among other designers, wants to force Google to reveal the identity of the anonymous individual behind the blog. Good luck, lady — why don’t you try viewing the writer’s full profile on Blogger, seeing what other blogs he or she has created and tracking them down that way?

The blog only has five entries (a lightweight compared to the highly-trafficked, frequently-updated Hot Chicks with Douchebags), and all three posts ridiculing personal photographs of Cohen are dated August 21, 2008. Nonetheless, Cohen has filed a defamation suit with Manhattan Supreme Court, so she can find out exactly who called her “fortysomething” and “haggard” when she’s only 36.

“It’s petty, it’s stupid and it’s pathetic,” Cohen told the Daily News. (You’re telling us!) “And when I do find out who did this, at least I’ll know who my enemies are.” Better yet, they’ll actually know who she is, too; “Liskula Cohen” and “Skanks in NYC” recently topped Google Trends, according to CNET.

But seriously. If every celebrity (or pseudo-celebrity — PLEASE DON’T SUE US, LISKULA!) decided to sue for libel and defamation of character over every tabloid, gossip blog and other news medium that posted untrue or defamatory information, the courts would never have time to deal with real issues. Issues like scalding hot McDonald’s coffee and whether or not Britney Spears should have her license suspended.

Case in point: Oh No They Didn’t!, a popular Livejournal community with the motto “The celebrities are disposable. The content is priceless,” posts hundreds of gossip items and rumors a day, many of which are refuted by publicists hours later. Since the community leaving most of the catty comments comprises over 1000 members, can we really open them up to litigation? Just think of all the individuals who’d be sued for responding to the post about Cohen’s Blogger-induced tantrum — half of them probably can’t even vote yet, let alone afford a lawyer.

Celebrity news blogs thrive on cattiness, fueled by commenters who can hide behind the anonymity of the internet. Perez Hilton, the self-proclaimed queen of the gossip blog kingdom, often scrawls crude genitalia and simplistic doodles on top of celebrity photos (using what looks like MS Paint) before unleashing his uncensored opinion in a manner that often makes Skanks of NYC seem kind.

Hilton’s blog, instead of attracting infinite lawsuits (unless you count a disgruntled reader), actually spurred celebrities to tip him off to their whereabouts and appearances, even offering interviews in the desire for free publicity. These celebrities know better than to care too much about what an “anonymous source close to the [insert star’s name here]” thinks or says.

Moral of the story: If you are remotely famous or even a little insecure, don’t Google yourself, unless you’re looking for new insults to fling at your friends. Or take it offline and make a good old-fashioned burn book instead. There’s nothing wrong with wanting to be a supermodel — if you’re not totally clueless about how to use the internet.

Pop culture fiend Magali Ferare contributed to the reporting of this article.