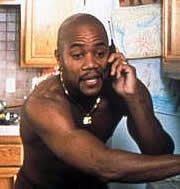 Talk of Apple’s iPhone forcing competitors in the mobile industry to adapt has largely been focused on its large multi-touch display and more recently, the App Store. But there’s another, small feature that never ceases to wow new iPhone owners: Visual Voice Mail.

It’s been around since the launch of the initial iPhone last year, but now competitors are starting to figure out that customers like it. First, Sprint licensed the feature for its Samsung Instinct phone, now Verizon is getting into the act, announcing Visual Voice Mail for its customers.

But there’s just one problem: It’s not free. Verizon is charging $2.99 per line to activate the feature. AT&T, by contrast, offers it as a standard included feature on all iPhones. When word of this feature first leaked out a few weeks ago, the assumption was it would be a free service from Verizon as well. It is not.

Verizon’s Visual Voice Mail will first be available on the LG Voyager phone but will soon come to other devices on the network. It says you can store up to 40 messages for up to 40 days.

Klausner Technologies owns the patents for Visual Voice Mail and made sure everyone knew that by suing AT&T and Apple not once, but twice. The sides finally settled in June, with Apple agreeing to license the technology from Klausner.