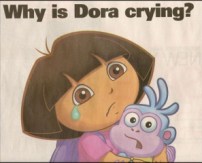 Time Warner Cable and Viacom’s drawn-out feud over rights fees could result in 13 million Time Warner and Bright House customers losing 19 popular channels, including Comedy Central, MTV and Nickelodeon, on January 1. That’s right, you could be saying sayonara to The Daily Show, The Hills and Spongebob Squarepants as soon as the clock strikes midnight. But that’s not all: Viacom is also threatening to yank online content. Happy New Year, eh?

Viacom’s cable networks are distributed by Time Warner, the fourth largest cable television provider in the U.S. Viacom has posted a message on sites it owns, such as MTV.com and VH1.com, alerting customers that they will lose their favorite shows on TV and online unless they act fast. Time Warner Cable’s director of digital communication (or someone posing as him), posted the following screencap to Twitter, according to DSL Reports, while Time Warner in-house speculation is brewing over whether or not the message is a scare tactic or if Viacom is ballsy enough to follow through with its threats.

“They’re somehow going to block Time Warner Cable / Bright House/ Roadrunner subscribers only from seeing their free video content, probably by blocking a range of IP addresses,” Time Warner theorizes on the site Long Reply (useful when Twitter’s 140 character limit just isn’t enough). That sounds a bit far-fetched and complicated to pull off, if not impossible. 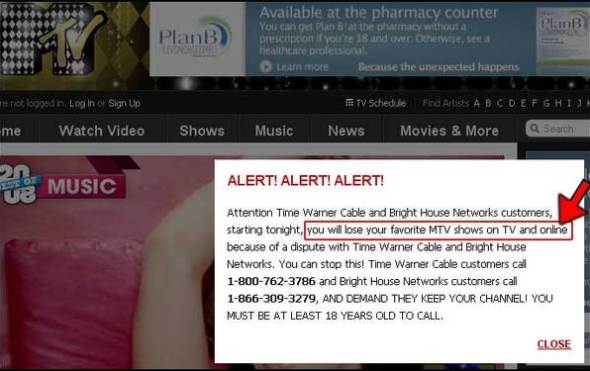 Time Warner doesn’t see why it has to pay Viacom more for content that’s available so readily online, especially since that arguably diminishes the content’s value. Why would customers pay more for cable (an additional $3 a month) during a recession if anyone can watch the shows for free from multiple sources? Those sources include the show’s own website, Hulu and Comcast’s Fancast, as Media Memo points out. However, cable subscription revenues will still trump any money brought in from online advertising. We’ll be hearing the phrase “analog dollars versus digital pennies” for awhile yet, unfortunately.

Viacom’s multi-pronged approach to convincing customers to riot also includes running TV ads asking its viewers to call Time Warner Cable and complain. Unsurprisingly, the ads have already made it to YouTube. Did someone say phone tree?

Finally, I leave you with some emergency rations in case the lovers’ quarrel isn’t settled in time, an unlikely outcome that would cost Time Warner Cable valuable customers and Viacom precious advertising revenue. It isn’t quite Nickelodeon favorite Dora the Explorer, but if Viacom’s really taking her off the air and offline, at least you’ll have Maraka and Mittens to comfort you.

UPDATE, January 1, 2009, 1:15 AM PST: Viacom and Time Warner Cable have stopped playing their game of chicken and reached a deal after the ball dropped in New York City’s Times Square early Thursday, says The New York Times. The final terms have not been disclosed, and details are going to be worked out over the next few days. However, an executive involved with the negotiations says that Time Warner has agreed to pay MTV Networks (Viacom is the network’s parent) a higher fee.

We’ll keep you posted. Happy New Year — Dora isn’t going anywhere, though she probably has a headache from fake crying.