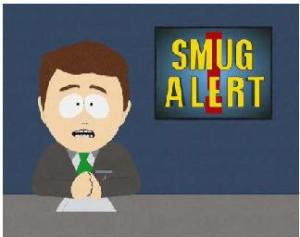 On Saturday night at SXSW a couple weeks ago, I was seriously considering seeing how far I could throw my iPhone.

The thing just was not working. And it hadn’t worked since SXSW started on Friday. It wasn’t Apple’s fault; it was AT&T’s. The network — as you may have heard — got absolutely slammed, and failed. I couldn’t make a call, I couldn’t send a text, and using any sort of data over the Internet was completely out of the question.

Luckily, on Sunday (a full two days after the conference started), AT&T worked quickly to address the problem. It still was far from perfect (and there was still no service in the convention center press room), but if I stayed in my hotel, I could use the phone as an actual phone again.

In the video below, shot at the conference by the blog The Dealio with D’Emilio, you can watch two AT&T employees rather smugly explaining the issue and nearly hurting themselves while patting each other on the back.

So what went wrong? Well, there were simply too many SXSW-goers with iPhones, and the network buckled under that weight. Interestingly, to fix the issue, AT&T didn’t deploy “cows,” which are cell towers on wheels that add more bandwidth to a network. (This is what most people thought would be the solution, but that apparently would have taken too long.) Instead, AT&T just turned up the bandwidth on its existing cell towers. Why they didn’t do that on Friday, I don’t know.

In some ways it was a good problem to have — it showed just how many people are now using AT&T. But for those of us who were actually at the event with an iPhone, it once again brought up the idea that maybe Apple really does need to spread out to more carriers. GigaOM’s Om Malik recently dumped his iPhone simply because of AT&T’s network. And while I haven’t had too much of an issue here in San Francisco, the Austin fiasco was a taste of a terror that I never want to experience again.

Around the 4:30 minute mark of the video, AT&T’s Chris Hughes says, “We can assure you that this isn’t going to happen again.” I sure hope not. Of course, he also claims at one point that every other network was an “epic fail,” but I was using a Verizon card for wireless data on my laptop, and it worked perfectly.