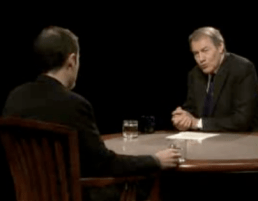 Twitter co-founder and chief executive Evan Williams appeared on Charlie Rose last week to talk about the service’s steep ascent. The video has now been posted online (and embedded below).

After acknowledging that not even he can really explain the success Twitter has seen, Williams explained micro-blogging to Rose, and the two talked about some of the key aspects of the service as it evolves into a mainstream utility. Here are some interesting quotes and notes: