Kaltura, unlike sites like YouTube that simply host and play videos, provides a full video solution that publishers can integrate into their own sites. Kaltura’s tools offer ways to upload, import, edit, annotate, remix, monetize and monitor videos. The company offers plugins for popular platforms like WordPress and Drupal, and the Kaltura software can be used on nearly any website. Kaltura’s system currently has over 38,000 users, including companies and organizations like Pepsi, Wikipedia, and Universal Entertainment. 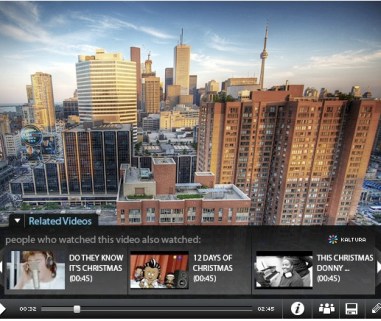 The New York City-based company, founded in 2006, offers hosting, as well as support and maintenance of the tools, for a fee from users who don’t want to deal with the technical aspects of the platform. For others, however, the tools are completely free for use and customization. Kaltura’s whole system is open-source, meaning it can be edited by anyone; according to CEO Ron Yekutiel, there are more than 1,000 active contributors to the project.

Kaltura’s partnership with LongTail Video, maker of the JW Player, which is used all over the Web, combines two major open-source video platforms. It will allow for Kaltura users to use the JW Player that is already on over a million websites, and it will let those already using LongTail’s products to take advantage of Kaltura’s collaboration, distribution and analytics tools. Kaltura is also integrating AdSolutions, a LongTail product that lets users monetize videos in a variety of ways through advertising. According to Kaltura, this integration will let you “embed any tag from any ad network into your website’s media player.”

Yekutiel sees these partnerships as part of the opportunity for open-source video. Publishers, he says, are tired of the YouTube model, which offers no control over or benefit from the videos they create; Kaltura provides the opportunity to have complete control over the videos, access to analytics, and options for monetization that have only increased this week.

Kaltura is ready and poised to do what Linux has done for operating systems, and what Firefox did for Internet browsers. “Right now, we’re the fastest-growing video platform on the market, and it’s because we’re the one tearing down the walled gardens, and opening the field in the video space.”

The company raised $2.1 million in 2007 from Avalon Ventures and angel investors, and it raised another undisclosed but reportedly larger amount in 2008 from .406 Ventures.