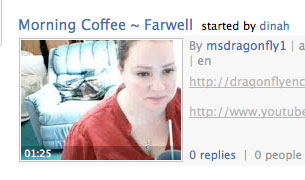 Have you created an account on a video sharing site yet? Don’t bother. Popular sites including twitvid.io and 12seconds.tv are dropping their signup requirements. Instead, they’ll let you login with a Twitter username and password.

12seconds founder Sol Lipman explained in a video posted this morning how the site’s new strategy works: Twitter users login with their Twitter username. 12seconds creates a member account for them. They can then post video clips up to twelve seconds long — a length specifically chosen for webcam video replies to other content.

The 12seconds account scrapes the user’s Twitter replies (“@paulboutin hi”) and direct messages, which are kept private. It leaves out all other tweets.

Lipman said in an interview that 12seconds is trying to capture not all of Twitter, only the conversations — @ or DM tweets — in which the user is involved. “We don’t want to be in the business of organizing people’s streams,” Lipman said, “Tweetdeck does a good job of that. What we really want to do is bring in just your conversations, and allow you to use video as a response platform for that conversation.”

Twitvid.io founder Chrys Bader (he’s technically a co-founder of Fliggo, which makes twitvid.io, but let’s get to the point) said twitvid.io’s new strategy is similar: “We want to create a video sharing platform that does not have a destination site.” Twitvid.io adds more social tools to the page it creates for Twitter users. They can set their twitvid.io page to use their Twitter background image. Users can follow each other and tag videos directly on twitvid.io’s pages, rather than going back to Twitter.

Yet for all these features, the competing video sites have the same problem as Twitter: How do they make money from Twitter users? Twitvid.io runs Google AdSense ads. 12seconds sells sponsored video pages for consumer brands including M&M.

The response-video genre is both groundbreaking and fun — 12 seconds of fame for everyone — but its popularity may be overrated. Seesmic founder Loic Le Meur, an early mover in personal videos, says all such sites will face a challenge trying to grow anywhere near as big as YouTube. “It’s not a technology or PR issue,” he said. “It is a human issue: Getting people show their faces in video and getting used to it.”

Both Lipman and Bader claim to be working on more lucrative monetization plans. For now, their focus is grabbing Twitter users in hopes of becoming the de facto default video link for tweets.