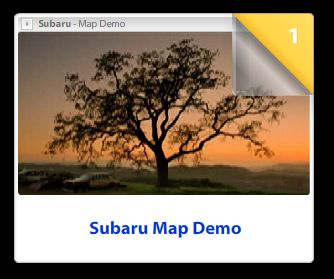 San Francisco video ad network VideoEgg is releasing five more ways for brands to take advantage of online video ads. These widgets will be added to the VideoEgg’s AdFrames platform, which launched in February.

AdFrames  allows advertisers to insert a second advertisement behind a first video ad, or “roll.” Each secondary ad is placed with a three-second countdown in the first ad’s upper left hand corner. See top screenshot.

When you mouse over the video add for three seconds, a second pane opens up, with more ways for the advertisers to engage. In this case, a video ad for Subaru also has an embedded app that shows me Subaru dealerships in the Bay Area once I’ve let the countdown engage. See second screenshot. 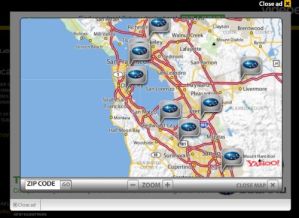 VideoEgg is offering up five different types of services to advertisers. They have named them as follows:

LIVE: This allows advertisers to insert RSS feeds into advertisements, and continuously update them without needing to reformat the whole ad. In the demo I saw, this meant that, for example, ads for the NBA Playoffs could have updated information about when and where to catch the next game.

LOCAL: By deriving your zipcode from your IP address, VideoEgg can also serve up psuedo location-based advertising, such as in the Subaru mapping applicaiton above.

RICH: This  means that multiple videos can be embedded into a single video ad. For instance, a video ad for the upcoming move Journey to the Center of the Earth can, once the rollover has been activated, also have behind-the-scenes featurettes for the curious moviegoer.

SHOP: An online e-commerce mini-store to be embedded in the ad. A video ad for AT&T, for example, could also deliver a single-pane shop, allowing you to browse through phones, see prices and options, and quickly deliver you to the checkout page.

SHARE: The least exciting option, in my opinion, this allows you to embed the video on a web page or share it via a variety of social networks, such as MySpace or Facebook.

The platform itself is surprisingly easy to use. The three-second countdown removes the annoyance of having videos pop up when my mouse accidentally stumbles over an ad. The widgets, once the ad is engaged are, for the most part, bright and good looking. You can play around the platform yourself at the VideoEgg Ad Lab site. I did find that one of the ads simply didn’t play at all for me on both Firefox and IE.

This is all part of VideoEgg’s broader ad strategy, announced this April, of charging by engagement rather than impression. Traditionally, advertisers are charged for every 1,000 impressions served (normally called cost per mille, or CPM, advertising). VideoEgg’s self-styled “Cost Per Engagement” pricing means that advertisers pay nothing until a consumer mouses over the video ad for three seconds and has the second pane open.

According to Troy Young, the Chief Marketing Officer at VideoEgg, the company is serving up over a billion impressions every month. He demurred to state how many engagements are resulting in, however.

The company has its eyes set on big prizes. VideoEgg is already working with many top-tier brands, such as Disney and Miscosoft, while also building out an ad network over major websites. There’s a rumor that the company is only willing to partner with websites serving up at least 10 million video streams per day (for reference: YouTube is said to serve up 100 million a day).

This is the latest strategy for a company that has changed its feathers quite often. VideoEgg began as a video editing and publishing site, but shuttered that site in May of this year, and is now focused on developing a video ad network.

[Full disclosure: I worked briefly at VideoEgg in the winter of 2006, spending three days reviewing user-submitted videos for objectionable content. During those three days, I saw some videos foul enough to make the most anonymous of 4Chan users blanch.]

The company has received rounds of funding from August Capital, First Round Capital, Maveron, WPP, and Focus Ventures.