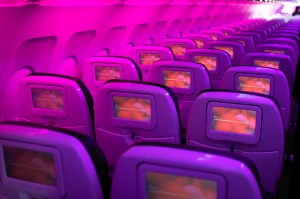 Since its launch, Virgin America has become the unofficial airline of Silicon Valley. With new airplanes, Wi-Fi on all flights, a Linux-based entertainment system, power outlets at every seat and a beautiful new terminal at its home airport of SFO, it has become the go-to airline for many in the tech community.

But lately, Twitter has been full of gripes about the once highly touted airline:

Used to love @virginamerica but they’ve become undependable and horrible at communicating with passengers. I’ll take on-time over hip.

@VirginAmerica Why would you go live with an online reservation system that doesn’t work? yfrog.com/h45hgzknj

The airline recently switched over to a new reservation system from Sabre, the industry-standard travel reservations network that started in the 1960s. The transition has caused significant issues with the airline’s Web site. Some passengers are having issues changing and canceling flights, making seat selections and viewing their frequent flier accounts. Airport check-in kiosks are also having issues. This has also led to dramatically increased call hold times.

Veteran blogger Anil Dash tweeted, “I’ve been fascinated by the botched Sabre migration. Worst since Hershey’s moved to SAP & had no candy for Halloween” in 2002.

Virgin spokeswoman Abby Lunardini said, “It’s a once in a lifetime cutover for an airline. If you look at the past history of cutovers [to new reservations systems], they never are easy for airlines. Every airline has tended to see issues for weeks, if not months afterward.” She said that airport operations have gone smoothly relative to other cutovers, but the Web side has experienced more issues than they anticipated.

The change was necessary because the rapid growth of the airline.

A reservation system change is one of the more complex technology challenges because airlines are 24×7 operations. “It’s a knife-edge cutover because you have live operations,” Lunardini said. “You have to move everything over to the new system at once.” She said the airline initially increased its call center staff by 30 percent (and later another 45 percent) and thinned its flight schedule in preparation for the switch.

The timing of the upgrade, right before the start of the holiday season, raised some questions on Twitter. Lunardini said Sabre provided two options for the switch: October, 2011 or June, 2012.

“We really felt it was a priority from a Web stability viewpoint but also from the business viewpoint to not wait until June of 2012 to make the switch, which would also be in the middle of the summer travel season,” Lunardini said.

The airline added extra airport staff over the busy Thanksgiving holiday weekend, and Lunardini said that the Thanksgiving weekend wasn’t actually that bad, given the holiday, with a high proportion of flights on time.

Members of the airline’s frequent flier program who traveled during the period received an email apology from the airline’s CEO and 5,000 bonus points, worth the equivalent of a free short-haul flight.

Because consumers have been using social media to complain about the airline, Virgin America has also been using those channels to respond. Virgin has staffed its social media team around the clock.

“We are really the first airline that has gone through this type of business change in the era of social media,” Lunardini said.

The asynchronous nature of social media is also helpful because people don’t have to wait on hold before getting a response. She estimated that the airline has sent about 10,000 Twitter direct messages to travelers since the cutover.

Lunardini said that a major deployment that went in on Friday should fix many of the issues that customers are experiencing. She hopes that any remaining issues will be fixed with another deployment schedules for Dec. 8.

Once the bugs are worked out, the Sabre system will allow Virgin to offer new capabilities such as codesharing with V Australia and Virgin Atlantic, an elite program for very frequent fliers and mobile tools.

“We are hoping that when we get on the other side of these last errors that guests will still enjoy the experience with us and stay with us,” Lunardini said.

In the meantime, frustrated passengers continue to use social media to vent. To its credit, Virgin America is leaving negative comments up on its Facebook page, where it could easily remove them.

“Arrrgffhggh. – based in silicon valley – high tech airline that can not get it’s website working for weeks – wrong. Hold time on phone over 47 minutes !!,” wrote commenter Winston Vaughan.