Two of the largest complaints about the new iPhone 3G revolve around the fact that it still doesn’t have either voice dialing or copy and paste functionality. It would seem that both of these omissions can be solved by software updates, and now we know they can — because apps are starting to come out with that functionality.

I think there are severe limitations.

First up is voice dialing. My old Motorola RAZR could handle me saying a name into the phone and it dialing that person’s number. My significantly more advanced iPhone cannot. A new app called VoiceDial changes that.

VoiceDial promises speech recognition for your iPhone. This is important to many users because it means being able to dial a number without ever having to look at the screen.

It claims to work with all languages because it stores speech samples which it links to contact names rather than using a vocal database. 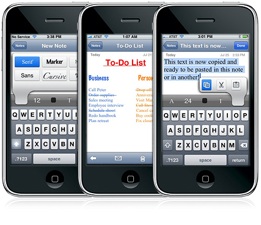 There are two downsides. First, the application has horrible reviews thus far. Almost all of these focus on the second problem. Which is that VoiceDial is $24.99.

The more important functionality for many users is the ability to cut and paste text on the iPhone. I know that personally this has been a major issue for me when I go to do something like send a link in an email to a friend from my iPhone. It simply can’t be done without typing it.

Apple has indicated that it could be on the list of features to implement eventually, but isn’t a high priority. (Other reports say it could be out as soon as iPhone OS version 2.1.)

With MagicPad, this functionality is coming, according to the blog Apple iPhone Apps. However, the app still hasn’t been approved for the App Store yet.

In other words, this will be nice a nice replacement for Apple’s current Notes app, but otherwise it’ll be fairly useless.

These two apps are a testament to developers being allowed to do a lot of things with their apps — but unfortunately, sometimes it’s just better if Apple does them.