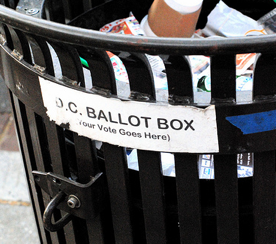 Brace yourself ladies and gentleman, we may have a hanging chad situation emerging out of last week’s Yahoo shareholder meeting. The meeting was largely uneventful as Yahoo cut a deal with investor Carl Icahn days before to diffuse his hostile takeover attempt (and he didn’t even show up). But there may be more to the story including potential voting fraud or at least miscalculation, a source tells AllThingsD’s Kara Swisher.

At the meeting, Yahoo chief executive Jerry Yang got 85.4 percent of the shareholders voting for him to keep his position with 14.6 percent withholding their votes to show their displeasure with him. Yahoo chairman Roy Bostock got 79.5 percent of the vote in his favor with 20.5 percent withholding. This was very surprising because the results for both men were actually higher than they were last year when the state of the company was obviously better than it is today, as Swisher notes.

But the real intrigue comes in when you consider that two of the largest funds with big stakes in Yahoo, Capital Research Global and Capital World Investors both apparently recommended that votes be withheld from Yahoo’s leadership to show their displeasure with the company’s performance. Capital Research Global owns 6.5 percent of Yahoo’s shares while Capital World Investors owns 9.8 percent. If both did use most of those shares to vote their displeasure, that would mean that nearly no one else voted against Yang and Bostock — something which seems very unlikely.

Capital Research & Management, the parent of the two funds has apparently asked its own vote tabulator, Broadridge Financial Solutions, to look into the matter.

Of course it’s important to note that it is entirely possible that everything here is kosher and that some of the smaller groups under the two large funding simply didn’t listen to the recommendations — but they typically do.

So what gives? Perhaps someone simply screwed up. After all, it’s not like Yahoo counts the votes itself. It hires an independent third party to count the results of shareholder voting.

If this is an error, it’s not like it will lead to the ouster of either Yang or Bostock, both will still have plenty of votes to maintain their positions on the board. But it will be yet another black eye for Yahoo and will highlight uncertainty about its leadership.

Update: A “truncation error” caused under-reporting of withheld votes for certain directors, according to the official statement collected by BoomTown. This error does not change the outcome of the voting, but as I noted, is yet another thing that looks bad for Yahoo.