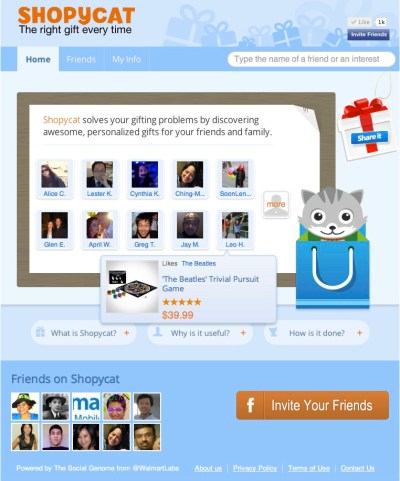 Wal-Mart, the mega corporation known for its mega discount stores, is ready to conquer a new mega frontier. It’s a land ripe with retail opportunity; it’s the land you already know as the social web.

“We’ve been working on how to add a social layer on top of e-commerce,” Anand Rajaraman, the head of WalmartLabs, told VentureBeat. “One of the key areas where we thought we could make a difference is in gift-giving … we thought if we could take a person’s interests and ‘likes,’ that are expressed on Facebook, and tie those with a vast product catalog, then we could make gift-giving much more enjoyable.”

Shopycat starts out as your elf-like assistant by featuring the Facebook friends you interact with the most, and providing you with personalized gift recommendations for them.

The application figures out friends’ tastes by mining and analyzing “likes,” status updates and declared interests, then matches that data against the Wal-Mart product catalog, and the catalogs of partner merchants such as Barnes & Noble, NBC Universal and RedEnvelope, to offer up a selection of suitable ideas.

For example, if a friend has repeatedly expressed his adoration of the Chicago Bears or has been known to quote from the beloved syndicated sitcom Seinfeld, Shopycat will come up with gift ideas best-suited for your passionate pal. If you want to question Shopycat’s judgment, you can click on a gift idea for a detailed explanation of why it was suggested. You can even spy on and tweak the gifts that Shopycat is recommending that your friends buy you.

For all the makeshift Santas out there, Shopycat could be the perfect little helper this Christmas, but just don’t expect it to do all the hard work for you. The application currently only passes you through to websites where you’ll need to buy the gifts in question. Next year, however, Shopycat will let you buy directly on Facebook, Ravi Raj, VP of product for WalmartLabs, said.

Shopycat has the potential to permeate Facebook’s 800 million-member social network simply because it comes from a company that sees close to one billion customers walk into its stores each month.

This means that a quest to dominate the social frontier will pit Wal-Mart’s Brobdingnagian bigness against tiny, lilliputian social commerce upstarts — Givvy, Imply Labs and a handful of others come to mind — already inhabiting the territory.

“The belief that we have is that we’re going through an inflection point in e-commerce because of two major trends: social and mobile,” Rajaraman said. “The whole of commerce is going to change, so the mission of WalmartLabs is to help reinvent the future and make sure that Wal-Mart is at the forefront.”

WalmartLabs, an 80-person group based in San Bruno, was established when Wal-Mart purchased Kosmix, a startup co-founded by Rajaraman that was working on a technology called “the social genome.” The technology, capable of mining social data to map the connections between people, activities and products, is now at the core of the Shopycat experience.

WalmartLabs also acquired social ad network OneRiot and mobile point-of-sale startup Gabble, and the group is now working on a next generation search experience for the Wal-Mart product catalog, an in-store social network (internally called “Storechat”) that will encourage customers to communicate with each other, along with additional mobile and social products.

People of Wal-Mart and the web: Prepare yourselves.