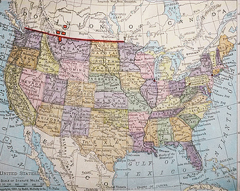 How popular is Apple’s new iPhone 3G? So popular that 21 entire states are without any at this moment.

Using Apple’s iPhone availability widget, Jim Neal, a retired PR man living near Kansas City, was able to find out that out of the 188 Apple retails stores in the U.S., 117 had completely sold out of the device. Further, only 27 stores have full availability — that is, have all three models (the black 8 GB, the black 16 GB and the white 16 GB) in stock.

So if you live in one of those states and want an iPhone, it’s time to get in the car (or if you’re in Hawaii, a plane or boat).

While the activation problems that plagued Apple and AT&T on launch day have been resolved, reports are that lines at many Apple stores are still incredibly long due to the slow activation process.

Still, this shouldn’t be a situation like we’ve seen with the Nintendo Wii, where even now, some 18 months after its release, it’s hard to find in stores. Apple claims new shipments of the phones are arriving almost every day.

And how about those AT&T stores carrying the phones? A company spokesperson tells Fortune that they “virtually” sold out the first day of sales.