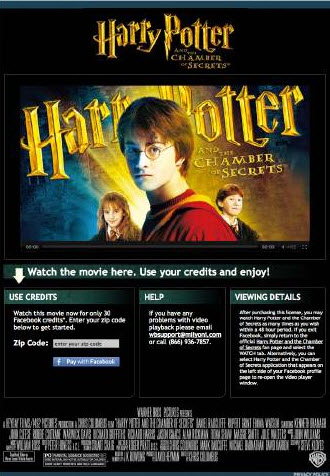 Warner Bros. is broadening its experiment with digital movie distribution by releasing five more marquee movies for rent on Facebook.

As video stores die off and consumers become more comfortable watching digital movies, Warner Bros. and other studios are moving to capitalize on digital revenues through newfangled models such as the deal with Facebook. The social network movie rentals are also a way to bypass services such as Netflix, which is perceived as being increasingly powerful in digital movie distribution.

Consumers in the U.S. will be able to rent films by clicking on the “watch now” icon and pay for the transaction with Facebook Credits, which is the social network’s new virtual currency. Users can buy Facebook Credits with real money sources such as credit cards.

It’s a small step, but it suggests that the experiment is going well. Thomas Gewecke, president of Warner Bros. Digital Distribution, said that the new titles will appeal to a broad audience and that these particularly titles have a lot of fans on Facebook.

Fans can rent a film for 488 hours and have full control of it in terms of pausing, rewinding, fast forwarding and resuming. They can also post comments on the movie, interact with friends as they watch, and update their status.