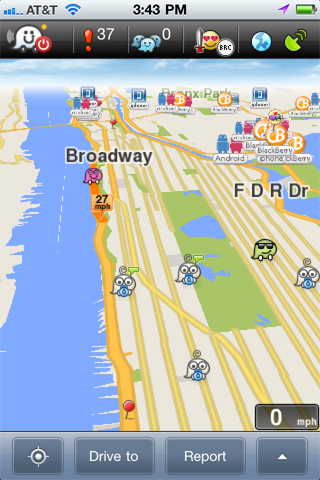 Waze, makers of an innovative crowdsourced app that offers free driving directions, is on a roll. The company just announced that it has scored $25 million in a second round of funding.

Waze says the funding will be used to “expand corporate and marketing initiatives,” build up its core infrastructure, and increase its staff as the company moves its headquarters from Tel Aviv to Palo Alto. In an interview, the company told VentureBeat that its investors were particularly enthusiastic over the phenomenal engagement it’s seeing from users. Waze just recently surpassed 2.2 million users — up from a mere 500,000 in January.

The company’s app, which is available on iPhone, Android, BlackBerry, Windows Mobile and Symbian phones, offers free turn-by-turn directions. Waze’s claim to fame is the generous amount of live traffic data it has access to, which is powered completely by user contributions.

Given its tremendous growth, Waze tells me that it will be spending quite a bit of time scaling its infrastructure. Everything on the platform is done in real-time, so the company can’t afford to have any slowdowns as it attracts more users.

Waze says its next big goal is to open up its platform, perhaps with some sort of API so that developers can take advantage of its data. Potentially, that would allow Google to take advantage of Waze’s live traffic data in its Maps Navigation app on Android phones. The company tells me that it’s also looking into bringing its application directly into cars that support apps, like those equipped with Ford’s Sync technology (which is developed by Microsoft). Waze could make its way into cars as early as two years from now.

The funding round was led by Blue Run Ventures and saw participation from other existing investors Magma Venture Partners and Vertex Venture Capital. Qualcomm Ventures also joined in on the round as a new investor.