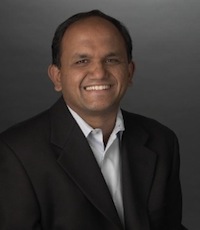 Adobe chief executive Shantanu Narayen spoke at the Web 2.0 Summit in San Francisco today, focusing particularly on the company’s Flash platform. His overriding message: When it comes to providing the underlying technology for web video, games, and other applications, this is Adobe’s game to lose — and Adobe doesn’t plan to lose.

In this market, Narayen is going head-to-head with software giant Microsoft, and as interviewer John Battelle noted, “They’re not joking around.” (Microsoft’s vice president of developer and platform evangelism has gone as far as predicting that Adobe will either disappear or transform dramatically in the next 10 or 15 years.)

After all, Adobe has huge reach already — the company recently said 75 percent of web video and 70 percent of web games are delivered with Flash. And in the last year it added features like high-definition video.

During the question and answer session, an audience member pointed out that Flash is also competing with HTML (the basic format for websites), which is supporting richer and richer apps. Narayen acknowledged that HTML is improving, but he said, “The fidelity that you get with Flash across all these browsers is a non-trivial task.”

Narayen was less direct when it came to talking about Adobe’s much-discussed relationship with another company, Apple. Despite the recently announced ability to convert Flash web apps into iPhone apps, the iPhone is still the major holdout when it comes to playing Flash web content in its web browser.

“I’d love to work with Apple to make it happen,” Narayen said. When Battelle pressed him for more details, Narayen would only add, “That’s a better question for Steve [Jobs, Apple’s CEO].”